Chromolithographic Loops in the collection of Lichtspiel / Kinemathek Bern.

“In 2015, the Deutsches Filminstitut (DIF) undertook the restoration and digitizing of 20 lithographic film loops from its collection, selected for their beauty and unusual colour technology. The loops bear no titles, and almost all have lost their original packaging, which formerly identified subject, producers and/or retailer; given this absence, any information printed on the film edges provides important clues. Two loops – [Ringkampf / Wrestling Match] and [Wippe / See-saw] – have the edge code “GC&CoN, dep.”, identifying Georges Carette & Co. The two were packaged together in a small can displaying the term “Litho-Film” with the label of the Vienna toyshop Anton C. Niessner and an emphatic fire warning, ACHTUNG! ZELLULOIDFILM! Only one other loop, [Clownsgesicht / Clown’s Face], carries a manufacturer’s edge code: “FOTO- BING-FILM-GESCH”. This shows a photographic image of a clown’s facial contortions, reproduced onto the film strip by monochrome lithographic printing. Along with the similarly produced [Pferdekutsche und Auto / Horse-carriage and Automobile], this may be one of the series first listed in Bing’s 1907 catalogue as “new ‘Photobing’ Films directly produced from original photographs”.

Most of the surviving loops show numbering on the films’ edges, which seem to follow 3 or 4 different styles or systems. The significance of this variability in numerical edge coding remains open for debate; some surviving loops may be condensed from longer subjects, or may evidence production processes similar to rotoscoping by showing a selection of phases traced from a photographic master, and it is likely that the different manufacturers had their own styles of edge coding. Yet, each producer could have changed their method of edge marking over the years, and production may also have been made jointly. How many manufacturers designed and printed loops is yet unknown; makers beyond Nuremberg should be considered, not least of all Lapierre in France.

The digitization work, carried out at ARRI Munich, was challenging. About half the shorts are still intact loops, most of them very shrunken, brittle, and warped, with damaged perforations, and the resulting scans still have a notable degree of instability. We settled for a fairly open framing on a neutral background, to leave at least some of the perforations and edges visible, to convey some sense of the intimacy inherent in the act of hand-cranking such a loop on a toy cinematograph. Although no doubt the original users were playful in their variation of film speeds, we chose a steady 12 fps, which occasionally looks a trifle fast, but seemed a good compromise while fitting smoothly with the 24 fps standard of a DCP, without any three-fold repetition of frames. We settled for five repeats of each subject, which allows time to study the on-screen action in full colourful splendour, without stretching the patience of modern audiences.

In colour grading, the aim was to match the colours and colour intensity of the chromolithographic printing process, while taking into account the original lantern illuminants: initially simple oil lamps, or, in higher-end models, duplex paraffin lights. Digital clean-up was performed with minimal intervention, limited to the most obtrusive dirt and the most irritating damage.

A new title card was created for each loop, indicating an assigned archival title and references to potentially corresponding entries in the catalogues of the Nuremburg manufacturers. This assignment of tentative identities and dates is a preliminary result of research. Only a selection of catalogues was available for reference; not all of them contain an itemized list of film subjects, and a fair amount of popular subjects are present in several manufacturers’ catalogues, making identification even more challenging. – ANKE MEBOLD

The 20 “Lithofilms” will be shown individually, interspersed throughout the week of the Giornate. All films are from the film archive of the Deutsches Filminstitut-DIF, Frankfurt am Main.

Key to Production and Distribution Companies

The assigned descriptive archival film titles are preceded by numbers indicating the order in which they appear on the DIF’s DCP. The series numbers are derived from original vintage catalogues. 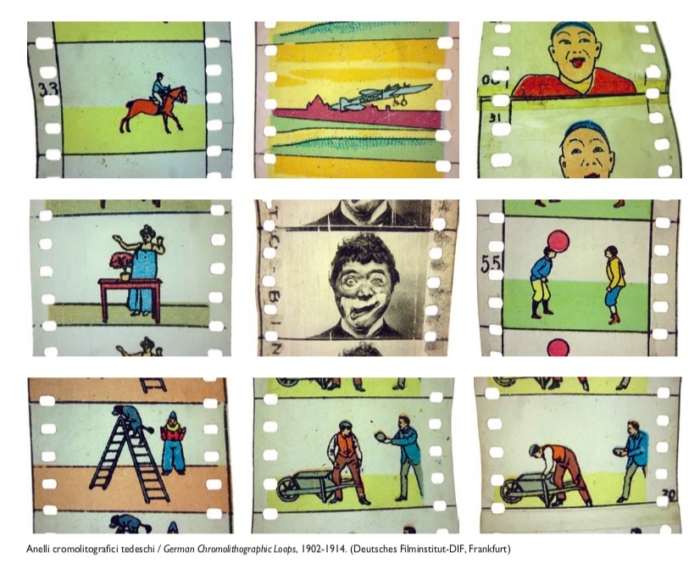