“Following the premises of one of William Friese-Greene’s systems, this two-colour subtractive process required that two reels of film be printed in parallel through a lens fitted with a prism that split light in two directions, through red and green filters respectively. The two negatives were then printed on a positive coated with emulsion on both sides, tinted green on one side and red on the other. In 1935, after the success of Technicolor, Brewster Color introduced a three-colour system with the addition of yellow tinting, with no success.”

“Although Brewster Color seems to have been used commercially there does not appear to be any reference available regarding specific pictures or studios that made use of it.”

Following the premises of one of William Friese-Greene’s systems, this two-colour subtractive process required that two reels of film be printed in parallel through a lens fitted with a prism that split light in two directions, through red and green filters respectively. The two negatives were then printed on a positive coated with emulsion on both sides, tinted green on one side and red on the other. In 1935, after the success of Technicolor, Brewster Color introduced a three-colour system with the addition of yellow tinting, with no success.”

“Brewster Color was a two-color subtractive color process introduced in 1915. For the original photography a red and a green separation negative was exposed in a beam splitter camera. Prints were made on duplitized positive film. The process was extensively modified after 1930 and made into a three-color system.

Although Brewster Color seems to have been used commercially there does not appear to be any reference available regarding specific pictures or studios that made use of it.

For the two-color Brewster Color process the red and green separation negatives were exposed simultaneously in a special beam-splitter camera which contained a beam-splitting block prism and two film gates. The block prism was replaced by a mirror surfaced shutter (Fig. 36) mounted at an angle so that the negatives in the two film gates were exposed. 13 After exposure the negatives were developed separately to obtain matched gamma.14 Brewster is one of the few workers in the early days of color processing who identified and attempted to compensate for the defect inherent in most two color processes, i.e., mismatch of contrast which produced warm shadows and cold highlights. He proposed that sensitometric exposures be made using films and filters of the same type that were to be used for taking the separation negatives. With these sensitometric exposures a developing time series would be processed and developing times producing matched gammas for the red and green records would be chosen. 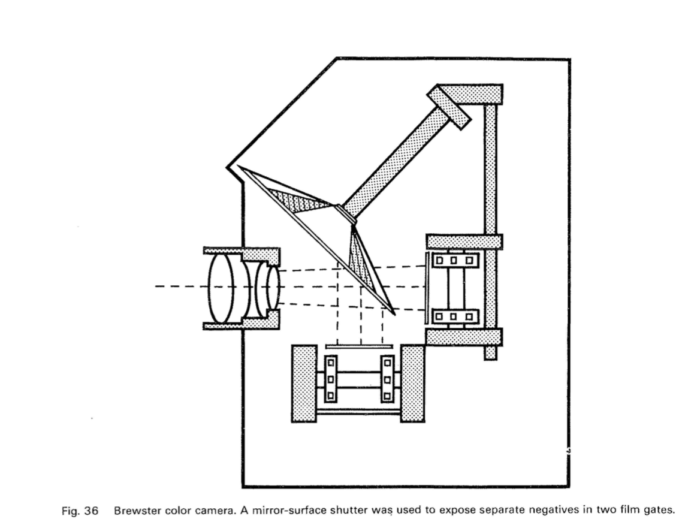 When a proper set of negatives had been obtained, prints were made on duplitized positive film. After exposure the prints were developed in a conventional black and white positive developer to produce a low contrast, low density image, fixed and washed. This was followed by hardening in a 10% solution of formalin, washing and bleaching.

A mirror-surface shutter was used to expose separate negatives in two film gates. After bleaching the film was washed and cleared in a 2% solution of sodium bisulfite and dyed in basic aniline dye. The side printed from the red record negative was dyed with malachite green, the side printed from the green record was dyed with Rhodamin. The film was then washed and dried.

The bleach described in the Miller patent USP 1214940 (formula above) unfortunately presented some problems when put into practical use. Its keeping qualities were not good; also, it had a tendency to dissolve out some of the silver iodide from the film which caused a loss of highlight detail. Also some of the silver iodide in the solution transferred to and was retained by the film; this silver absorbed dye like the image-bearing portions of the film producing muddy white.

To overcome these problems Brewster proposed a modification of the process in which the bleach was formed within the image layers. In the modified process the film was developed, fixed and washed, then hardened in a formaldehyde solution, cleared and dried. Next it was treated with an alkalin solution of potassium iodide and potassium iodate, 8 to 1 proportion, forming a 10% solution. From this pre-treatment it passed into a chamber where it was exposed to acetic acid fumes which reacted with the iodate and the iodide to form iodine. An alternative proposal was to bleach the image by immersion in an acid bleach instead of the acid fume treatment. When bleaching was completed by either method the excess iodine was cleared by treatment with a 2% sodium bisulfite solution, and the film was dyed in a basic aniline dye. 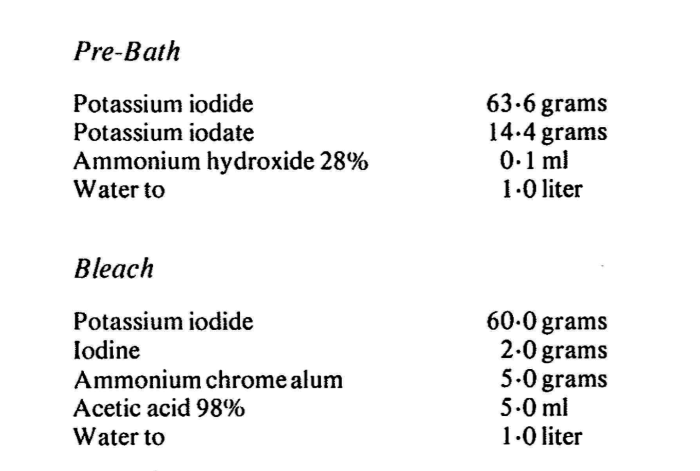 As the demand for three-color in place of two-color prints increased, Brewster Color was changed from a two-color to a three-color process. Under the new system two-color prints were made in the normal manner of duplitized positive. The third color, yellow, was added by first transferring a mixture of cuprous chloride and hydrochloric acid to the print from a matrix and then dyeing in a solution of Aura mine. Prints were prepared for transfer by first “laking” the dyes to make them as insoluble as possible. If the dyes were basic dyes mordanted on silver iodide, “laking” was not necessary.15 The matrix was prepared by printing the blue separation negative through the base of the matrix film and developing up a relief image through the use of a pyro tanning developer and a warm water wash off.16 The silver image was then removed by treatment with a ferricyanide bleach followed by fixing in a nonhardening fixing bath. This was followed by another wash, then the matrix was soaked in the cuprous chloride solution and was ready for the transferring step. Transfer took place very rapidly, in approximately one-tenth of a second, on a machine illustrated diagrammatically in Figure 37.17 Immediately after transfer the print was treated with a 20 to 50% solution of potassium iodide, washed and dyed in an auramine dye. After dyeing the film received an acid rinse to set the dye and was washed and dried 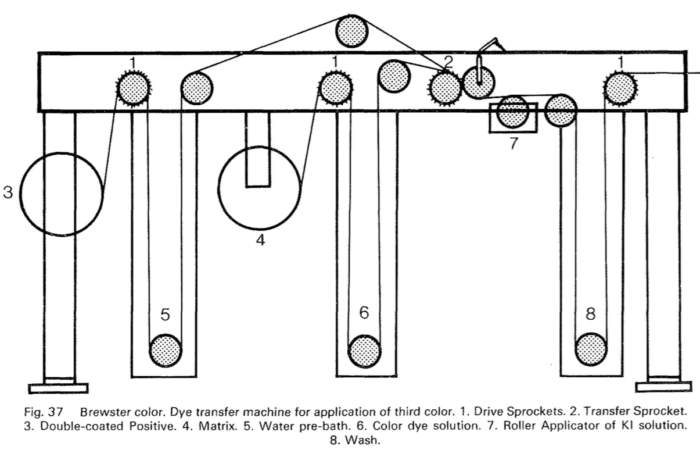 A demonstration of three-color Brewster Color was presented April 12, 1935 to a joint meeting of the Colour and Kinematograph groups of the Royal Photographic Society.18 Among the films presented was Let’s Look at London, a film which showed interior and exterior scenes, including a ballet performance. Comments regarding the showing were “remarkable steadiness,” “extraordinarily good reds.” It was believed that the lack of sharpness was due to the imbibition printing. 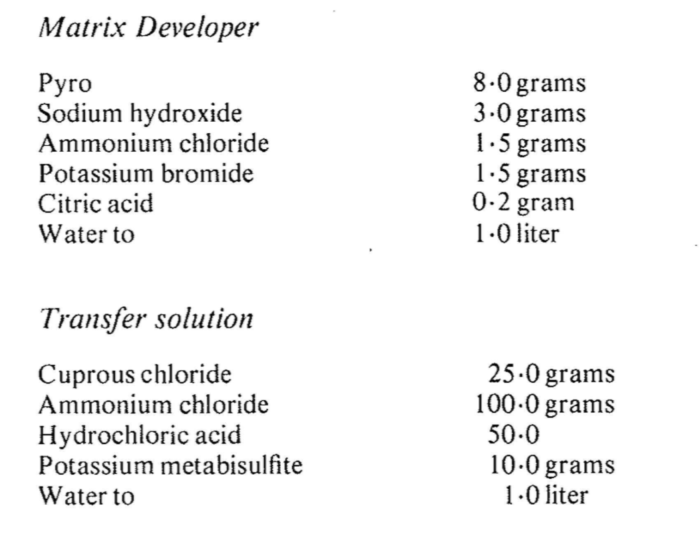 Subtractive color employed principles opposite from those of additive. Instead of combining colored light to create an image, subtractive processes worked by absorbing wavelengths of fight, removing parts of the spectrum to leave the remaining colors visible. These techniques were preferable in obtaining good color rendition for motion pictures, but they were difficult to achieve. Additive processes may have been successfully demonstrated and commercialized first – most prominently by Kinemacolor – but the results on screen tended to be flawed and often difficult to watch. In recombining the color records in projection, fringing, flickering, and poorly illuminated images were frequent side effects.

Three-color subtractive photography as a principle was simple. Once three color records – red, green, and blue – had been recorded onto black & white negative, the resulting prints or transparencies were dyed the corresponding colors – cyan, magenta, and yellow. Bringing the three color positives together superimposed in register created a full-color image.

These principles were thoroughly understood and often exploited in an experimental manner in the photographic world, but practical solutions for capturing and delivering three-color images were complicated and nearly impossible for motion picture use. Like their predecessors, KC&W’s engineers opted to capture two colors instead of three for their additive process. Comstock’s sensible “step development” strategy first required the perfection of an entirely new printing process and the refinement of the principles behind Technicolor’s first color camera.

“The Brewster Color process was comparable to Technicolor’s additive camera, but used a semi-mirrored perforated partition angled behind the lens (known as a “Swiss-cheese mirror”) to redirect light instead of a beam-splitting prism system. The two color records were captured onto separate rolls of film behind the mirror, then printed onto double-coated film and dyed complementary colors. Percy Brewster was an independent inventor from East Orange, New Jersey, whose process evolved over many years but never reached mainstream commercial viability. Brewster remained unable to exploit his process on a large scale, although D. W. Griffith used it twice in the early 1920s; both Way Down East (1920) and Dream Street (1921) contained brief Brewster Color sequences.9

9 “New Color Process,” Film Daily, April 13, 1923,1. The Brewster process also holds the distinction of enabling the first color cartoon. The Debut of Thomas Cat, released in 1920 as part of Bray Pictograph No. 423, a magazine reel distributed by Goldwyn.” 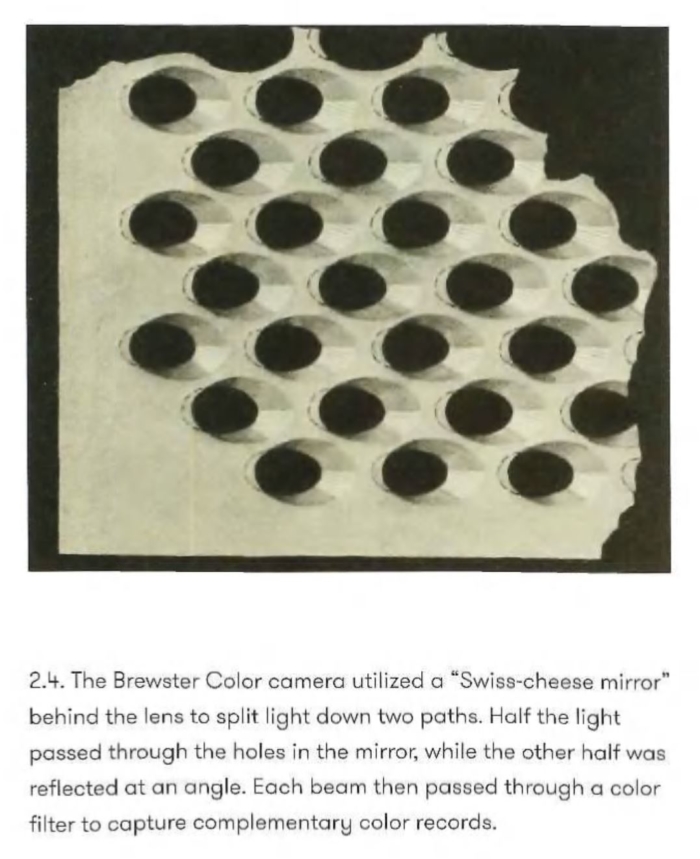 61 The Gentleman from Arizona (Earl Haley).”