“Public showings of the work done at this plant in Hollywood have been given to Los Angeles audiences.

The release prints are made on double sided film. Both sides are developed at one time and then toned red on one side and bluegreen on the opposite side. The tones are two-bath metallic colors from iron and uranium. The negatives are made with the film pack system of two films emulsion to emulsion in the camera. The front film carries a surface color of red-orange which acts as a filter to the back panchromatic film. The front film is not sensitive to red.”

“Public showings of the work done at this plant in Hollywood have been given to Los Angeles audiences.

The release prints are made on double sided film. Both sides are developed at one time and then toned red on one side and blue-green on the opposite side. The tones are two-bath metallic colors from iron and uranium.

The negatives are made with the film pack system of two films emulsion to emulsion in the camera. The front film carries a surface color of red-orange which acts as a filter to the back panchromatic film. The front film is not sensitive to red.”

“Sennett Color was a two-color subtractive color process announced in 1930 by the Sennett Laboratory in Studio City, California. This process used a new bipack film produced in England called “Film Pack” for the original photography.16 Prints were made on duplitized film.

The films used to make up the “Film Pack” bipack consisted of a panchromatic negative and a specially made negative known as the Red Ortho Front Negative. This film had a blue sensitive negative emulsion overcoated with red filter layer. Two color separation negatives were obtained by placing these films emulsion to emulsion in the camera and exposing them simultaneously. The light coming through the camera lens passed through the base of the Red Ortho negative exposing the blue record. The red filter overcoat permitted only the red light to pass on to expose the red record. After exposure the negatives were developed in a normal black and white developer, fixed, washed and dried. The red filter dye was removed from the overcoat of the blue record negative by immersion in a 3% solution of sodium hydrosulfite.17

Release prints were made on duplitized positive film. After exposure on a step registration printer both sides were developed in a conventional black and white positive developer and then toned. The side printed from the red record negative was toned blue-green and the side printed from the blue record negative was toned red. The tones are two metallic colors from iron and uranium.18

No further information is given concerning formulas or techniques used. A search of the patent literature 1920 to 1940 indicates that no patents for a color process were issued to the Sennett Company. Therefore, it appears that the well known ferric ferricyanide and uranium ferricyanide toners were used. 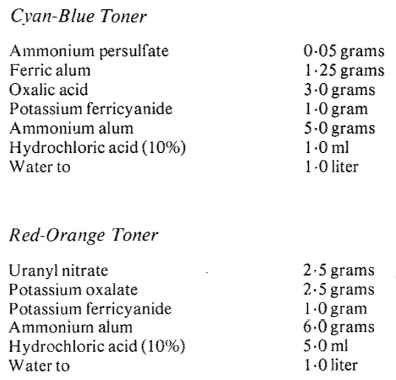 Camera.— Bipack in a normal camera equipped with special gate and magazines.”

In the 1910s and 1920s, slapstick comedy shorts were released by the thousand. Nearly all of these productions were filmed in black-and-white, which tallied perfectly with the cruel slapstick world of stereotyped characters and violent and destructive actions. The fact that Mack Sennett was also a pioneer in natural color processes is far less commonly known.1 In line with so many legends and apocryphal stories about the self-proclaimed King of Comedy, color does not fit in easily with the slapstick studio’s image of a crude and mocking use of the technology of picture production. This article studies surviving film prints, shooting scripts, and press material to examine Sennett’s exploration of natural color through his use of Technicolor and Multicolor, culminating, in 1930, in the launch of his own two-color process, aptly called Sennett-Color. In addition, a filmography listing all the released Sennett shorts containing color film, including the identification of the color process, is added as an appendix.

By inserting Technicolor sequences into the Bathing Girl shorts, constructing one of the best equipped soundstages in early Hollywood, and successfully combining sound with Multicolor film, Sennett had already proven that he was not afraid of technical challenges. With his keen eye for commercial opportunities, Sennett was inclined to try his hand at a natural color process under his own name. This research was facilitated by several key introductions in the industry, including the special dye-filtered negative for bi-pack filming developed by Eastman, and the commercial availability of duplitized film from Kodak and Dupont. After more than six months of testing, a huge investment in a color lab with printing machines and a chemical room, and the salaries for the cast and crew of an unsuccessful test film (Bulls and Bears, 1930 filmed in color but released in black-and-white), Sennett was finally able to release Radio Kisses (1930) with sequences in Sennett-Color. The subdued quality of the color rendition was favorably reviewed in the Los Angeles Times despite remarks about a certain blotchiness (Schallert 1930). Around the same time, Sennett’s chief technician Paul Guerin filed a patent application for a contact printer with two light sources on either side of the film gate, typically to enable printing on two sides of duplitized film (Guerin 1930). Inspection of one of the few surviving original nitrate prints, Strange Birds (1930), confirms that Sennett- Color was a two-color process printed on double-coated film. The film was toned cyan-blue on one side and orange-red on the other, and finished with a protective varnish on both sides. The soundtrack was a RCA variable-area track, but not toned blue as in the Multicolor process.

Between September 1930 and November 1931, Sennett released ten shorts in Sennett-Color: six one-reel Mack Sennett Brevities, two one-reel Cannibals of the Deep shorts, and two two-reel Mad Sennett Comedies (see Appendix). These full-color shorts share a novel approach to color, employing the expanded realism of color and sound film for comic effect. The advertisement announcing the Mad Sennett Brevities put it in catchy phrases: “Light comedy-novelty stories that hit the high spots of our hectic modern life. Our sports, our hobbies, all our crowded interests. And always girls, girls, beautiful girls” (Educational Film Exchanges, Inc. 1930a). Contemporary subjects as diverse as airplanes, speedboat races, exotic animals, and tourist outings comprise the colorful settings, matching the technology that captured them. Using these sports and hobbies as subjects also invited unusual camera angles. Speed (1931), for instance, deals with a race between two girls to marry a football star. One of the contenders tries to win the race by airplane, and the beauty of the scenery below is filmed through the airplane windows. The World Flier (1931) features shots of a speedboat race as seen from an airplane, and Movie-Town and Strange Birds open with aerial images establishing the film’s locations. Wrestling Swordfish (1931), The Bluffer (1930), and Movie-Town have underwater color shots filmed by the Sennett submarine camera, depicting exciting marine life such as fighting swordfish, a game of water polo, Olympic swimmer Buster Crabbe, and a blushing fish.

While the stories still deal with the familiar comical incidents surrounding love triangles and silly aristocrats, the backgrounds are virtually travelogues promoting novelty settings. Strange Birds, for instance, pictures colorful birds in the Catalina Bird Aviary, and Who’s Who in the Zoo (1931) introduces the animals in the Selig Zoo. Both locations provided exotic escapism at an affordable price, “as modern as television, and as homely as the average American husband,” to paraphrase a tagline (Educational Film Exchanges, Inc. 1930b). Also, the embedding of comic actions in timely topics and actual locations harks back to the early Keystone days, when film crews rushed out to exploit the spectacle of an actual event and a crowd of onlookers for a slapstick short. Sometimes even pure non-fiction shorts were released, if the footage permitted or the release schedule necessitated this. Of course, releasing the non-fiction A Glimpse at the San Diego Exposition (1915), along with the comedy short Fatty and Mabel at the San Diego Exposition (1915), also provided an original to spoof and to make fun of. When, in 1930-1931, the most popular short formats were the travelogue and the newsreel (both greatly enhanced by natural color and synchronized sound) (Ramsaye 1931: 59), Sennett could easily cash in on movies mocking those film forms, by adding comic elements that burlesqued them. The tone of the shorts was educational, even instructional, but a funny accent, a song, or a color joke undermined the seriousness of the information. When, in Movie-Town, a girl wearing a red dress falls in the swimming pool, she resurfaces wearing a blue one. Since Movie-Town is also a movie about the making of movies, the switch between the two colors of the color process functions as a self-referential comic device on a technical as well as on a narrative level. Furthermore, when the tagline announcing the Mack Sennett Brevities claimed that they depict “our sports, our hobbies, all our crowded interests” (Educational Film Exchanges, Inc. 1930a), this might very well have been referring to Sennett himself, who documented his own hobbies and sporting activities and released them as novelty subjects. Two Sennett-Color shorts in the Cannibals of the Deep series, The Trail of the Swordfish (1931) and Wrestling Swordfish (1931), depict Sennett on a fishing trip in Baja California. With his typical flair for business, the Sennett-Color process was also made available for the straight commercial field with the formation of the short-lived Mack Sennett Industrial Film Division in 1930 (Anon. 1930).

Unfortunately, Wrestling Swordfish was the very last short in Sennett-Color. It was released only one month before Sennett Color Film Ltd. ceased all color activities in December 1931. The bill of sale stated that “color proved an unwise venture” (MSC 1932) but the discontinuation of the color work was more probably connected to the very stringent patent situation in 1931, when the Technicolor Corporation won a major patent victory in preparation of its three-color process, paralyzing all methods of manufacturing color film in its wake (Anon. 1931).

Perhaps it is ironic that Mack Sennett, the king of silent slapstick comedy, won an Academy Award for 1931-1932 with the documentary all-color sound short Wrestling Swordfish. But winning his first Oscar in the category ‘Short subject – novelty” reassured the audience that Sennett was still up-to-date after nearly twenty years of filmmaking, and still spoofing the technicalities of picture production.

1 I would like to acknowledge the professional assistance and kindness of the experts at the following archives for their invaluable help in making a lot of rare, precious, and fragile material available: Barbara Hall and Jenny Romero at the Academy of Motion Picture Arts and Sciences, Margaret Herrick Library in Los Angeles; George Willeman at the National Audio-Visual Conservation Center of the Library of Congress, Culpeper, VA; Nancy Kauffman, Anthony L’Abbate and James Layton at George Eastman House, Rochester, NY; May Haduong and Melissa Lovesque at Academy Film Archive, Los Angeles; Marc Quigley at the UCLA Film & Television Archive, Los Angeles; and sennett experts Brent Walker and Rob King.

Papers in the Mack Sennett Collection in Margaret Herrick Library, Academy of Motion Picture Arts and Sciences, Beverly Hills, will be referred to as: MSC followed by the date of the individual file or paper (see also endnote 2).

Troland, L. (1927b) “Some Psychological Aspects of Natural Color Motion Pictures”, Journal of the Society of Motion Pictures Engineers, XI, 32: 686-690.

Walker, B. (2010) Mack Sennett’s Fun Factory: A History and Filmography of His Studio and His Keystone and Mack Sennett Comedies, with Biographies of Players and Personnel, Jefferson, NC; London: McFarland & Co.”

“A comedy short in color by the Sennett color process was shown at a Broadway theater in October, in which underwater photography was reported as being quite natural.235

The negatives are made by running two films through the camera simultaneously, the upper film acting as a filter for the lower. Prints are on double coated stock and are toned with inorganic salts.236

61 The Gentleman from Arizona (Earl Haley).”