1. Process for the production on a negative band of colour constituent images (negatives), forming a continuous series, the process having the following characteristics:

2. Process as in Claim 1, having the further characteristic that the beam-dividing means do not involve the passage of the beam through any refracting medium.

E.P. 414,059 of the same patentee deals with means for rotating for adjustment the metal mirrors in front of the objectives and the detailed design of the oscillating filter sector (Fig. 122). See also E.P. 478,500, 483,079, and 478,501. The latter describes Hillman’s projection system. Hillman has lately turned his attention to three-colour beam-splitters. 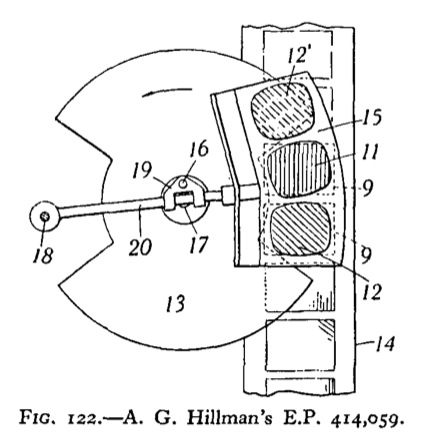 It seems that Mr. Hillman was at one time engaged upon the mechanical work of the Cinecolor process for Messrs. Cox & Daponte. He left Cinecolor and interested Mr. Kay Harrison of Gerrard Industries Ltd. A company was formed later, known as Colourgravure Ltd., in which company Mr. Alexander Korda became interested, London Film Productions taking a share interest. Owing to the association of London Film Productions with the Hillman process it received considerable publicity in 1933-4. It was announced that pictures would be filmed by Mr. Korda, but no pictures were ever released, and this may have been due to the fact that a camera made according to the Hillman patents would have little chance of avoiding serious defects of time-parallax, and to a lesser extent of space-parallax. Nor, at the time, was any announcement made as to the proposed method of presenting films taken with the camera. Were they to be projected by some additive device? Or were they to be printed by one or other of the available two-colour processes? But when London Film Productions adopted Technicolor (subscribing some £50,000 to Technicolor Limited) it became unlikely that the Hillman camera would ever be used.

In the Hillman camera two frames are exposed simultaneously one above the other. In front of the apertures in the gate is an oscillating filter element having three filters, red, green, red. The first two frames are exposed through the green and red filters, say, the film is then moved down one frame and the filters move too, so that at the next exposure the frame, which has already been exposed to green, receives a second exposure through the same filter, while the next unexposed frame comes into position above to receive an exposure to red. The film then moves down another frame and the filter moves up, so that the frame which has just received a red exposure receives another exposure through the other red filter, while the following frame is exposed for the first time to green. Thus obviously each frame receives two consecutive exposures through its appropriate filter. Time-parallax fringing would thus be inevitable.

The two images are obtained by a pair of lenses in front of which is a mirror system comprising an inclined stainless steel mirror in front of the upper lens with a hole through which rays pass to that lens, the remaining area of the mirror reflecting the beam to the second mirror which is in front of the lower lens and inclined thereto at an angle of 45°.

Projection.—Described in E.P. 478,501.—Films carrying groups of three colour-record images are fed through a projector by single-image shifts at approximately the same speed as the negatives from which they were made, and the images are projected simultaneously in pairs, each first with the preceding image and again with the following image; the negatives from which they are printed have images exposed in a similar manner, or pairs of images simultaneously exposed together twice. The projector has two adjustable objectives, a two-image gate, a single-image intermittent mechanism and a rotating filter disc comprising groups of filters of which 1 and 4 are blue, 3 and 6 are green, and 5 and 2 are red. See also E.P. 483,817.”

While it was never commercially exploited, Hillman Colour is nevertheless an interesting footnote in the history of colour cinematography in Britain. At the fifth annual general meeting of Gerrard Wire Tying Machines Co. Ltd, part of Gerrard Industries, held in July 1930, Chairman Kay Harrison announced to the shareholders that Gerrard had acquired world rights – excluding the USA and Canada – for a new process for printing colour images on paper at great speed. The system was known as Colourgravure and to exploit it a subsidiary of Gerrard, known as Colourgravure Ltd, was set up. In announcing this development, Harrison noted that the process was to be used for the printing of packing labels but that ‘the process will involve revolutionary changes in other directions from which the company should derive considerable benefit’. One of those ‘other directions’ was the acquisition and development of patents in an additive process which was being developed by Albert George Hillman, known as the Hillman process. Hillman had previously worked on Cinecolor with Demetre Daponte and Sydney Cox.

In the Hillman process, two frames were taken simultaneously through two lenses, one above the other. This was done through the use of two mirrors before the two lenses. The light hit the upper mirror which was perforated, allowing some of the light through to the upper lens, and reflecting the rest of the light down to the lower mirror, which was angled to direct the light onto the lower lens. The frames were taken through an oscillating filter containing three filter elements: red, green and red. Two frames were exposed, one through the red filter and one through the green, and then the film moved on one frame, as did the filter, so that the same frame was exposed through its filter twice, once in the upper gate, once in the lower. By this method a red frame would be exposed through the red filter in the upper gate, then moved on one frame with the filter to be exposed again through the red filter in the lower gate. At the same time, a new unexposed frame would be exposed through the green filter in the upper gate, before being moved on to the lower gate to be exposed again. As reported by Cornwell-Clyne, the shutter on the camera moved in the opposite direction, so the second exposure of each frame effectively began before the first exposure of the following frame. The aim of this was to reduce the time between the exposure of each frame and thus reduce fringing.

In 1934 meetings began between Gerrard Industries and Alexander Korda of London Film Productions, at that time Britain’s most celebrated production company thanks to the success of The Private Life of Henry VIII (1933), to discuss the possibility of London Films using the Hillman process. These negotiations were probably prompted by the Prudential, who had a stake in both Gerrard and London Films. In December 1934 it was agreed that London Films would assist with the development of the Hillman process.

Testing of the process took place in the early part of 1935, but it was evident that it was not yet ready for commercial exploitation, while simultaneously in America the first three-strip Technicolor feature, Becky Sharp (1935), was in production. According to Charles Drazin, after successful previews of Becky Sharp, Technicolor founder Herbert Kalmus came to Britain to sell the process and began negotiations with a financier, Sir Adrian Baillie, out of which came a British production company, Tower Films, which was to make only Technicolor films. The fact that Korda’s American distributor and partner, United Artists, agreed to distribute Tower Films’ output prompted Korda to join the negotiations around this already-proven process. Gerrard Industries were also involved, with Kay Harrison set to become managing director of Technicolor Ltd, so with both major developers now aligned with Technicolor, the Hillman process faded away at the end of 1935.