Limbacher (1969): Four Aspects of the Film. A History of the Development of Color, Sound, 3-D and Widescreen Films and Their Contribution to the Art of the Motion Picture. New York: Brussel & Brussel 1969, p. 45. View Quote

Cosmocolor, newest of the two-color film processes, was given a demonstration before a small trade audience, at the projection rooms of Wilding Pictures Corporation in New York Tuesday.

The material shown was chiefly industrial including a one-reel subject on the new Plymouth car, made by the Wilding concern in Detroit.

The amusement industry has heard slightly and almost casually of the Cosmocolor process in connection with an experimental version of “A Western Welcome”, a two-part RKO singing cowboy production. RKO released the picture in black and white, however, because of trade reasons, said to be principally the impracticality of a separate special campaign for a lone two-reeler.

The RKO experiment is perhaps attributable to the fact that Floyd Odlum, personage in the RKO financial picture, is one of several “downtowners”, meaning Wall Street, interested. Other financial interests are in Chicago and Detroit. Norman E. Wilding, president of the concern bearing his name and specializing in industrial picture production, is said to be interested only as a user of the process. Cosmocolor originated in Hollywood, the invention of Otto C. Gilmore, who has worked in color many years. David Blankenhorn is president of the company.

The demonstration of Cosmocolor made favorable impression upon the technical and professional members of the audience.

“The process and product present all of the merits of best specimens of the prior two-color systems and appear to escape many, probably most, of their faults and manipulative shortcomings”, observed Terry Ramsaye, familiar with production in Kinemacolor, Prizma, Kellycolor and related processes.

Cosmocolor is made with a standard camera, with a simple special optical system of lenses and prisms, recording its two-color separation images in the area of a single standard frame, which is split horizontally. Standard panchromatic negative is used. The spectrum is covered by the familiar cinema two-color pair, an orange-red and a blue-green. Flesh tints, foliage and sky colors are adequate. The inescapable deficiency in rendition of purples and pure yellows is to be noted, and is admitted by Cosmocolor. This is held to be an unimportant factor in many phases of color work, especially when weighed against special facility and speed of production.

Cosmocolor works under normal lighting of black and white conditions. Prints are made after the manner of Prizma and kindred process, on positive stock bearing emulsion on both sides. Projection is by standard machines, without special adjustments.

Cosmocolor’s prospects appear to be in the less exacting areas of the amusement screen, where three-color capacity is not demanded, and in such recording functions as the newsreel and industrial pictures where time and price are important. Special advantages in the 16 mm. field are claimed.”

“Cosmocolor was a two-color additive process for color cinematography invented by Otto C. Gilmore in 1935.21 Special optics composed of a series of block prisms were required on both the camera and the projector. Before the process was actually used commercially it was changed to a two-color subtractive process. Special optics were still used on the camera but the prints were two-color subtractive prints on duplitized positive film.22

According to J. L. Limbacher the only feature motion picture on record that is known to have been filmed in Cosmocolor was The Isle of Destiny, produced and released by R-K-O Radio Pictures in 1940.23

The two-color additive Cosmocolor process was a system which employed a series of block prisms to produce two adjacent substandard size images in the area of a normal 35 mm frame (Fig. 15). Exposures were made on panchromatic film, the right image through a red filter and the left image through a green filter. The negatives were processed in conventional black and white processing solutions and prints were made on normal black and white film. These prints were projected with special optics on the projector which rotated the two images 90 degrees and superimposed them on the screen.24

The two-color subtractive Cosmocolor process introduced in 1939 utilized the same optical system as the additive system to produce the original negatives. After the negatives were processed, a set of color master positives were made on a special step registration optical printer. In this printer the negative ran horizontally and the master positive vertically (Fig. 16). Therefore, there was no need to rotate the image optically, although a slight enlargement was necessary. To complete a set of master positives, it was necessary for the film to pass through the printer two times. When this was accomplished a set of master positives were produced which were normal for size and orientation. Then prints could be made on duplitized positive by any of the several two-color printing systems.25 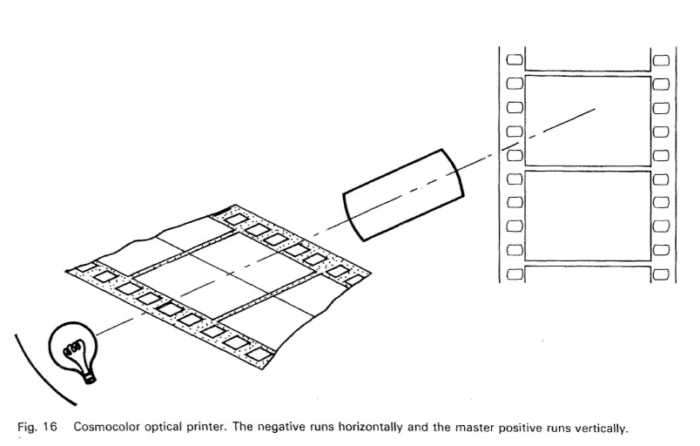 A third basic change in the Cosmocolor process appeared in 1943. USP 2315783 and BP 556426 described a three-color system for color cinematography. In this system three substandard size images were produced on a normal size 35 mm frame. A series of block prisms similar to those employed in the Cosmocolor two-color process were used to produce the three images, two normally oriented and one rotated 90 degrees (Fig. 17). There is no information concerning the method Gilmore intended to employ in printing these negatives. Also there is no record of this process having been used for actual production.26 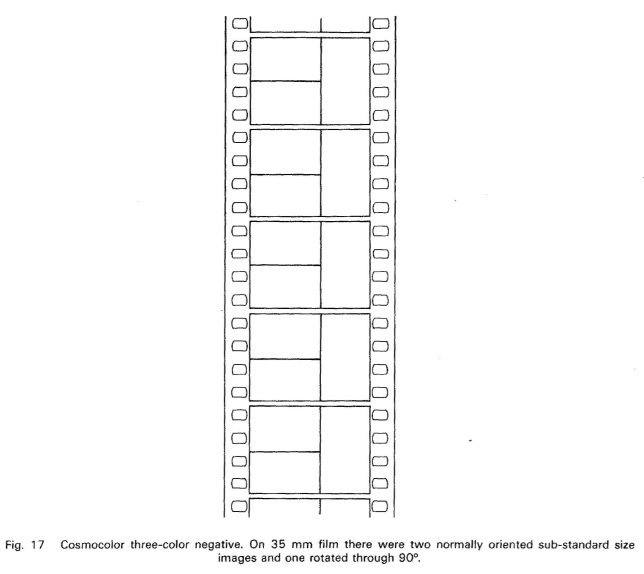 “First marketed commercially in 1937, Cosmocolor was a two-color subtractive process which used a complex beam-splitter camera with a double-coated positive print. The images were colored by a special method of toning.111 The only feature picture on record which is known to have been filmed in Cosmocolor was THE ISLE OF DESTINY, produced and released by RKO Radio Pictures in 1940. The process, when projected, looked similar to the Cinecolor and Magnacolor systems.

(Limbacher (1969): Four Aspects of the Film. A History of the Development of Color, Sound, 3-D and Widescreen Films and Their Contribution to the Art of the Motion Picture. New York: Brussel & Brussel 1969, p. 45.)