Limbacher (1969): Four Aspects of the Film. A History of the Development of Color, Sound, 3-D and Widescreen Films and Their Contribution to the Art of the Motion Picture. New York: Brussel & Brussel 1969, pp. 70-71. View Quote

The Panacolor Process was a three-color subtractive color process for making motion picture release prints. Panacolor, Inc., was formed June 10, 1957, for the purpose of developing and applying a color process invented and patented by Michele P. L. Martinez.11 During the period 1957 to 1962 the process was improved and techniques for its application on a commercial basis were developed. Printing speed was increased and color reproduction was improved. Also a processing laboratory capable of producing 160 million feet of release prints per year was constructed.12

On June 27, 1962 a press preview of the process was held at the Screen Directors Guild building in Hollywood. The material used for the demonstration consisted of miscellaneous test footage plus a production reel of the MGM feature picture, The Horizontal Lieutenant, The following day the Hollywood Reporter announced that MGM had ordered fifty prints of The Horizontal Lieutenant from Panacolor; the remaining prints were to be made on Eastman Color Print Film by the MGM laboratory.13 Other feature pictures that used the Panacolor print process were The Castilians, Pyro, Samson and Ulysses, Secret Seven and Mother Goose a Go Go.

Release prints made by the Panacolor process were made on conventional black and white film which was developed in a series of dye coupling developers.14 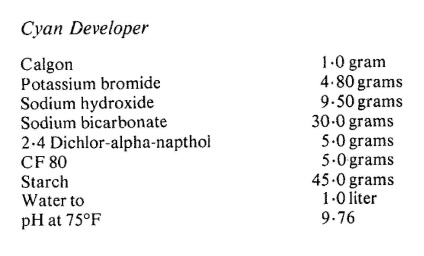 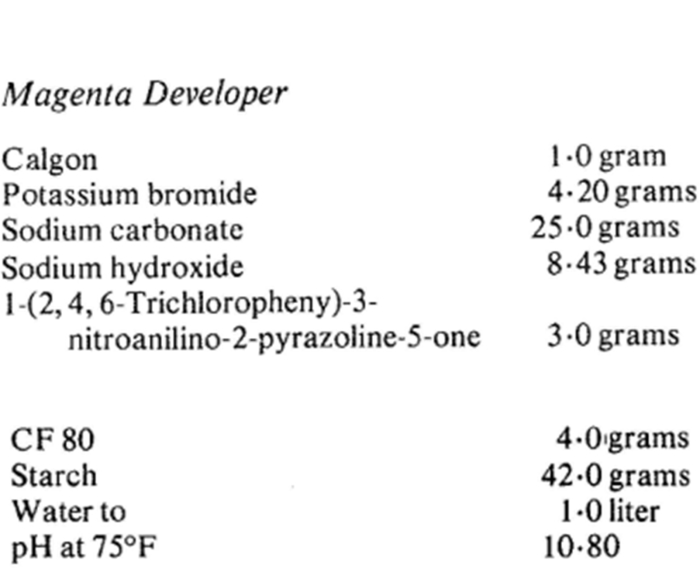 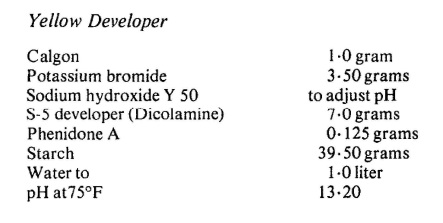 Instead of using the immersion or spray technique for the treatment of the film with the developing and bleach solutions, the Panacolor process used a wheel applicator to coat the film with thixotropic solutions. These thick solutions were mixed in special tanks with counter-rotating agitators and pumped to the coating stations where the correct amount of material was metered to an applicator of special design.15 Temperature was maintained plus or minus 0.5°. Relative humidity was maintained at plus or minus 2.5% at 97.5%.

Early in 1961, a new low-cost method of making color release prints was introduced in a process called Panacolor. The system had been in the development stage since 1957.

MGM had taken an interest in the Panacolor process in the early days of its development and in July, 1961, purchased enough stock to gain controlling interest.

It was made clear that Panacolor is not a color film process in itself — that is, the company was not organized to shoot films in color, but merely to make color-controlled release prints for showing in theatres.

Of the over 100 methods of imparting color to motion picture film, the majority have faded into oblivion and few have been hailed as successful.

Within a span of 65 years, from the crude hand-painted films of Edison and Pathe to the latest advances in Technicolor and Eastman Color, the color motion picture has been constantly moving ahead with ever-increasing improvements to bring its public the most beautiful images possible in the theatre.

In the early days of the film, competition was almost non-existent. Today, color films are still highly competitive. With the development of television, there is more need than ever for economical and quick methods of shooting and developing color films. Some processes which faded in recent years might be revived for color television use.

Although there will probably always be black-and-white films, the many excellent color systems now on the market assure a large number of color films as long as there is a market for them.”

(Limbacher (1969): Four Aspects of the Film. A History of the Development of Color, Sound, 3-D and Widescreen Films and Their Contribution to the Art of the Motion Picture. New York: Brussel & Brussel 1969, pp. 70-71.)