Summary— The so-called “three-strip” method is generally considered to give the best results when taking professional color motion pictures. An objection to this method is that it requires the use of a special camera fitted with a beam-splitter prism. This paper describes work that led to the development of a single multilayer negative film which can be used in any standard motion picture camera. After exposure and before development, the two upper layers are wet-stripped separately onto special transfer supports. Thus the single support of the multilayer film bears three color-sensitive emulsions in the following order: a red-sensitive layer next to the support, an intermediate green-sensitive layer, and an upper blue-sensitive layer. The red- and green-sensitive layers, and the green- and blue-sensitive layers are each separated by interlayers which facilitate stripping of the two upper layers. The film has an over-all thickness about the same as standard motion picture negative film. Its speed is such that good negatives of an open landscape can be exposed at f/8 or even f/11. An experimental stripping machine is described which accurately registers the perforations of the two stripped layers with those of the original film on which remains the red-sensitive layer.

IT IS GENERALLY ACKNOWLEDGED in the motion picture industry that the method of taking professional color motion pictures that has given the best all-around results is the so-called “three-strip” method. The separate films, after exposure, are developed in a regular negative developing machine, resulting in three excellent original tricolor negatives. An objection to this method is that a specially designed beam-splitting camera must be used. The question came to mind: Would it be possible and practical to design a single film which could be used in any standard motion picture camera, with regular optics, and which, after processing, would give a set of original tricolor negatives of quality comparable to those made by the three-strip method? One answer seemed to be a stripping film. 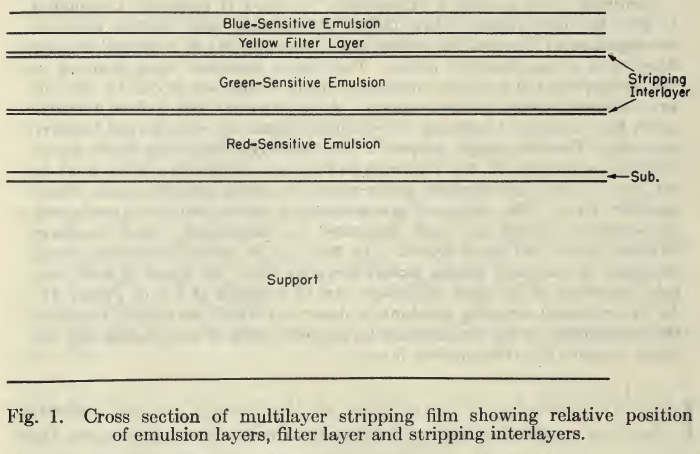 In the first experiments, a two-layer film only was attempted, since obviously if a single stripping operation could not be done successfully, satisfactorily stripping the more complicated triple layer would be highly improbable.

On February 6, 1941, exposures of a resolving-power chart were made in a Mitchell camera on such a two-layer film. The stripping was done before development on a simple machine on which the strippable emulsion layer was transferred onto a special transfer film bearing a suitable substratum. There was no pretense at maintaining registry between the two images, which, of course, must be accomplished for motion picture making. Figure 2 shows actual samples of these first negatives.

The technique of stripping was simple. The two-layer film was wetted in plain water, temperature approximately 70 F, for about 10 sec, and while under water was brought in contact with the transfer film; then the two films were rolled into intimate contact between two rubber-covered rollers. The “sandwich” was then allowed to remain for about a minute in order that the emulsion layer about to be stripped could bond to the transfer film. The actual stripping operation was performed over two rollers. After drying the film, development was performed in the conventional way.

About this time a blue-sensitive emulsion, bearing on its surface a yellow filter layer, was coated on a separate film. This made bipack experiments possible. Quite a bit of this bipack work was done on 4 x 5 in. and 5 x 7 in. sheet film, the bipack being exposed in a camera having a sheet of plain glass in the film holder. Some useful experiments were carried out in this way insofar as the emulsion properties were concerned, but the scheme was soon abandoned as far as serious picture making might go, because of the many defects in the negatives, such as Newton rings, dirt and halation.

Soon after this, a crude 35-mm machine was assembled which permitted stripping some film in which the perforations of the two-layer film were held in precise registry with the transfer film during the bonding period.

Color prints from these two negatives were made on a contact registering printer. The prints were found to be in good registry and no signs of distortion of the stripped emulsion layer were evident.

After this encouragement, a three-color multilayer film was attempted, but it was not until July 29, 1942, that a successful three-color coating was available for camera tests. The over-all thickness of this multilayer film was approximately the same as a black-and-white motion picture negative film. The sensitometric characteristics were excellent, all three emulsion layers having an exposure latitude comparable to that of regular negative material (Fig. 3). The speed was such that good negatives of an open landscape could be made at f/8 or even f/11. The keeping properties of the emulsion layers equaled those of regular black-and-white emulsions. Because of the thinness of the three emulsion layers, the gammas were on the low side, the red- and green-sensitive layers giving a gamma of about 0.55, and the blue-sensitive layer still lower, being approximately 0.30. The blue-sensitive layer was purposely made with a low silver halide density in order to interfere as little as possible with the resolving power of the two underlying emulsion layers. For most printing processes this necessitated either intensifying the blue negative or making a “dupe” having the desired over-all gamma. 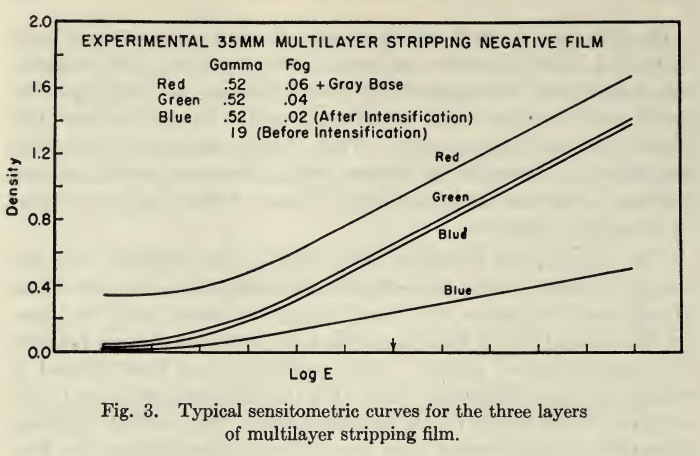 When working out a motion picture film, it was considered important to succeed in stripping prior to development in order to avoid defects arising from depth development. As is well known to those working with material coated in several layers, these defects can be quite serious. The defects are caused mainly by the reaction products in the lower layers diffusing to the upper layers. Another advantage in stripping before processing is that a certain measure of gamma control is possible by regulating the amount of development in the usual way.

Good progress was being made both in the manufacturing end and in the processing end. Many thousand feet of tricolor film were stripped, developed and printed, although the process could not yet be regarded as ready for the market. The photographic quality of the negatives was of a high order of excellence (Fig. 4) and obviously could be used in any of the known color printing processes. 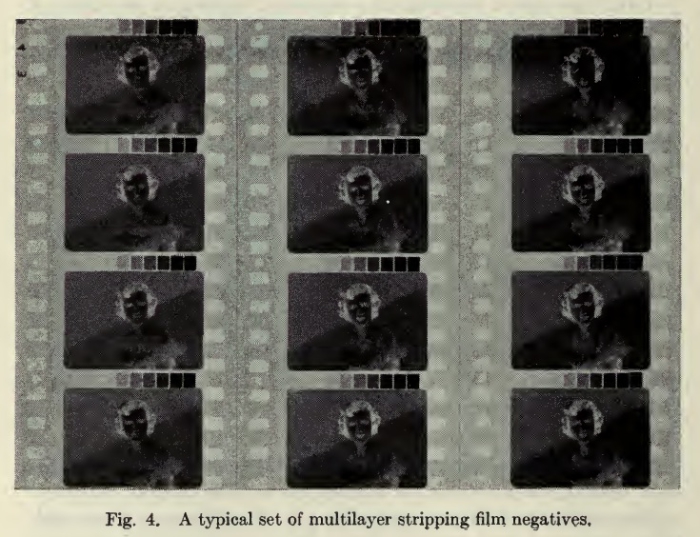 During the war years, work on the preparation of coatings was practically brought to a standstill, though worth-while efforts were continued in other directions, particularly in the design of a registering-stripping machine. After two or three machine designs had been tested and rejected, the basic principles on which a practical machine could be built were established and practical experimental work was done as circumstances permitted, ending in the construction of a machine, the essential parts of which are shown schematically in Fig. 5. 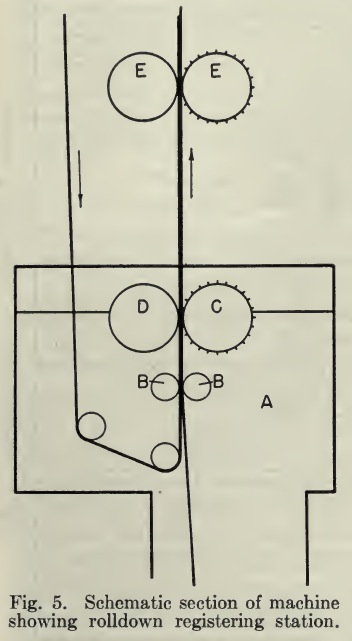 In the figure, A is a tank of 70 F water in which the multilayer stripping film and the transfer film are wetted for approximately 10 sec. The two films meet at the rubber-covered wringer rollers, B, where they are rolled into intimate contact. Four inches farther on, the perforations of the two films are brought into accurate registry by means of a specially designed sprocket, C, and a socket roller, D. The sprocket roller, C, is positively driven at the film speed of 30 fpm. Since the perforation pitches on any two films are never exactly alike, it is necessary on the machine to keep the shorter-pitched film stretched to match the pitch of the longer one during at least part of the bonding time. This is accomplished by means of two other sprocket-socket roller assemblies, one of which is indicated in E. These two sprockets are friction clutch-driven and have an overdrive of approximately 5%, thus maintaining the required tension. The distance between the registering sprocket and the first overdriven sprocket is 18 in., and it is 48 in. between the first overdriven and the second overdriven sprocket.

By the time the film arrives at the second overdriven member, the adhesion between the emulsion and the transfer film is such that the films can continue on their path without being under tension, although the bonding is not firm enough for stripping.

In Fig. 6 the “sandwich” next is seen passing over a sheave, F, then down into a loop, and finally up to the two simple stripping rollers, G. After parting company, the two films pass through a drying cabinet of conventional type from which the stripped emulsion passes on to a regular take-up at the end of the machine (Fig. 7), while the red-plus-green multilayer film, when dried, continues on to a second wetting, rolldown, registering station, and is stripped in the same manner as the blue-emulsion layer. The red-sensitive emulsion remains on the original support. After these two films are dried in a second drying cabinet, they are also taken up at the end of the machine. Development is done on another machine. 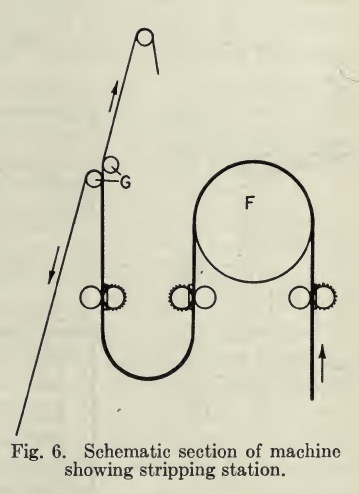 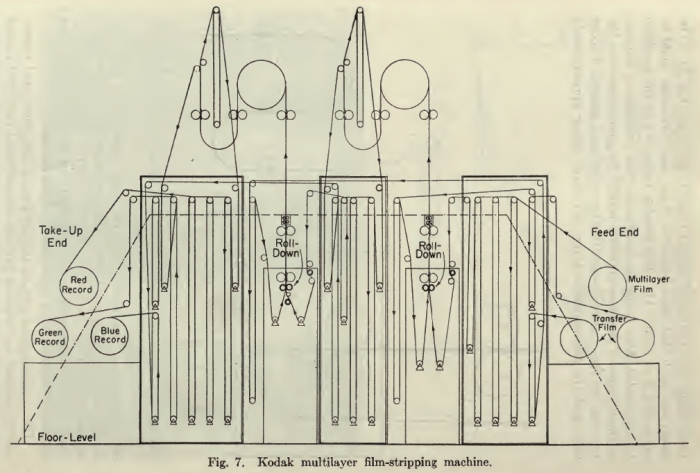 In Fig. 8 a small piece of film is shown being stripped by hand. Figure 9 is a close-up photograph showing in detail the important rolldown registering station on the stripping machine that was sketched in Fig. 5. In the photograph (Fig. 9) is seen a straight film track. It is important that the films, when registered, move on through the machine in a straight line until the adhesion is sufficient to prevent slippage occurring between the two films. As previously mentioned, this state is reached immediately after the film has reached the second overdriven sprocket. The track serves to maintain the film in the required straight path and also acts as a means of stripping the films from the registering sprocket. The purpose of many of the other details in the photograph will be easily understood by film-processing engineers. 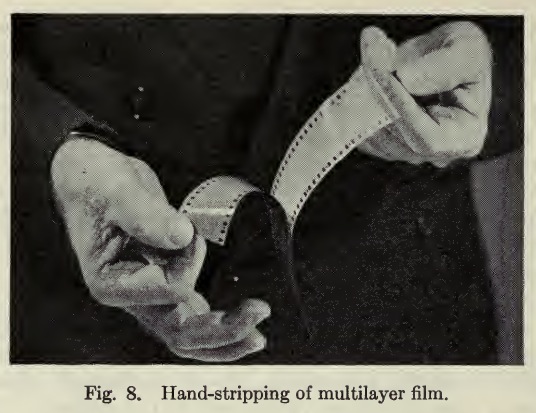 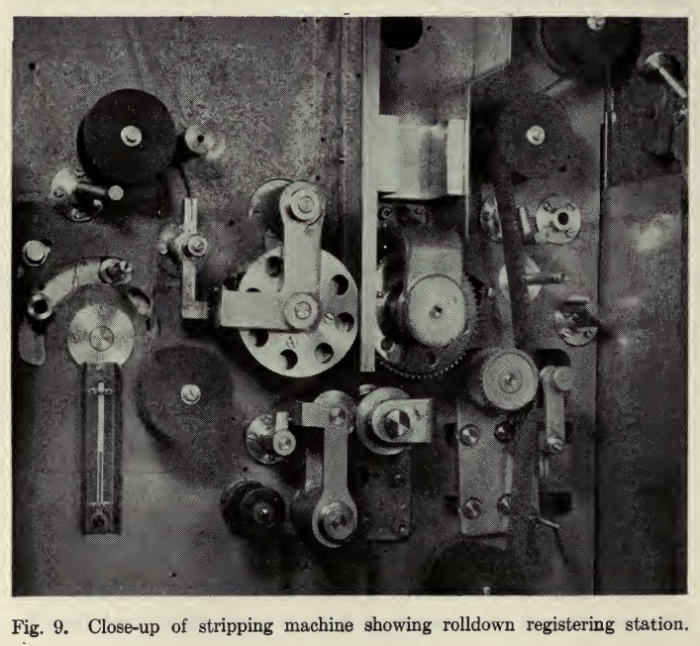 PRESENTED: October 10, 1949, at the SMPE Convention in Hollywood. Communication No. 1312 from the Kodak Research Laboratories.

NOTE: At the conclusion of the paper, a short motion picture was shown which demonstrated the method of stripping the multilayer film, first by hand using small pieces, then by the registering and stripping machine with long lengths of film.”