Du Pont has produced a color release positive stock suitable for making color prints in the professional motion picture field. It is designed to be printed from three black and white separation negatives and to be developed in color during a single passage through a developing machine of conventional construction. The film has a monopack structure consisting of three emulsion layers superimposed on one side of standard cine film base. Each layer embodies in a unique manner an appropriate colorless dye generator capable of forming a dye image under development.

The mechanism of color forming development in its original conception is rather simple. When a developing agent reduces silver halide the agent itself is oxidized. If certain types of developing agents are chosen and a suitable color-forming compound is present, the oxidized product immediately couples with the color former to produce a dye in situ. The “pyro stain” encountered by early photographers was simply oxidized pyro coupling with itself to form a yellow insoluble dye on the silver image as it developed.

An interesting proposal was made as early as 1912 to utilize color formers for the production of color pictures by coating three emulsions on one support according to the following diagram:

This proposal, though theoretically sound, failed to function because the available color formers had an appreciable solubility in water which caused them to migrate into all the layers, especially during coating and processing.

Subsequently, the problem of getting non-migratory color formers was approached by different workers in several ways:

(1) Color formers have been made which seem to adhere to gelatin as certain dyes do to textile fibers.

(2) Migratory color formers have been chemically combined with long chain or complex ring structures which give giant molecules too big to wander through the gelatin structure of the emulsion layer.

(3) Color formers have been made non-migratory by incorporating them in a colloid (a resin or gum) and then dispersing the colloid in the emulsion into very small particles.

Thus in all previous approaches to the problem emulsion layers for color-forming development have contained at least three components — gelatin, silver halide and color former. In the release positive worked out by du Pont only two components are employed — silver halide and a synthetic polymer which plays the role of both the gelatin and the color former previously used.

It was logical for du Pont with wide experience in producing such polymers as nylon, neoprene and polythene, to undertake the synthesis of dual-role polymers for color photography. Three different polymers have been made for the present film. Each one contains an appropriate dye-generator as a part of the complex polymer molecule. Furthermore, these polymers exhibit properties which are superior to gelatin in many respects.

It has been argued that a slight solubility of the color former in water was essential in order to bring about the dye-coupling reaction during development, and that the migration of a soluble color former had to be prevented by means such as those referred to above. In the new conception presented by du Pont, the color generator only swells in the processing solutions. There are no problems whatsoever of migration or solubility. When the polymer is swollen the color-generator, though locked in the polymer molecule, remains highly reactive with the oxidation product of the developer. Positive emulsions made with these polymers are characterized by a high dye-generating efficiency and sharp definition of image.

The layer arrangement in du Pont color release positive departs from the order commonly used by monopack producers, as shown in the diagram, Fig. 1.

Such an arrangement is permissible because the printing is done on a registration printer and any one of the three separation negatives can be directed into the appropriate layer by the proper selection of printing light. The particular arrangement above permits optimum quality in that the least important record from the standpoint of definition, the yellow, is placed in the bottom layer where diffusion effects caused by printing through the two emulsion layers are least noticeable. 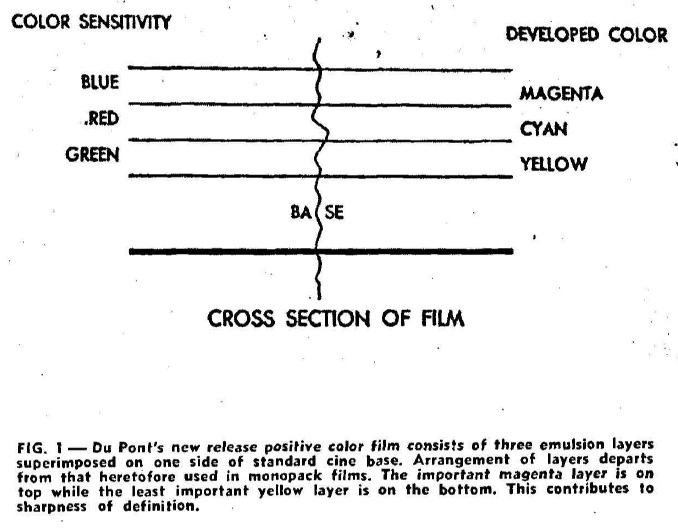 The du Pont layer arrangement suggests the use of a dye sound track and a blue-sensitive photocell for reproducing sound. A track in magenta, which gives good response to a blue cell, can be confined to the outer layer to get the advantage of sharp definition. But since blue cells are not a part of the present theater equipment, a silver-plus-dye track is recommended, and this can be obtained by several known methods, such as preventing the bleaching of the sound track area or by redeveloping or sulfiding the track after bleach.

The color release positive film, although yielding acceptable results with separation negatives made from 35mm and 16mm color originals, will give maximum quality with black and white separations made in a split-beam camera or by other means capable of giving black and white originals.”

This remarkable product is a multilayer film for release printing from three colour separation negatives. The film has three light sensitive layers, each sensitized differently so that the desired layer can be exposed by suitably filtered light.

The light sensitive silver halide grains in each layer are suspended in three synthetic polymer layers which combine the functions of carrier and colour generators. The polymer molecules have attached to them chemically the necessary colour-forming structure to produce the three subtractive primary colours, yellow, magenta and cyan.

The silver grains, when developed, are intimately in contact with the colour-forming groups. This results in very high efficiency of dye formation and the use of very thin layers for increased resolution.

The important magenta layer is on top while the least important yellow layer is on the bottom. This contributes to sharpness of definition. (See cross-section Fig. 1.) 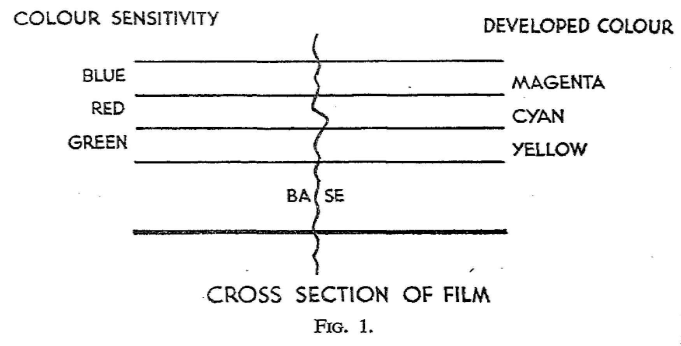 Conventional types of registration printing equipment may be used. Colour filters are used in order to record the colour separation records in the appropriate layers of the multilayer positive. The sequence of printing is as follows:

Printing can be carried out satisfactorily using a registering step-printer at 22 feet per minute, with illumination from a 500 W. clear projection-type tungsten filament lamp with a spherical reflector. The exposures in meter-candle-seconds required to produce a neutral image of a density of 3-0 are:

Du Pont Color Release Positive Film may be processed in conventional types of developing machines having suitable tank arrangement to permit the sequence of processing operations shown below. Processing consists of four chemical steps with suitable rinses and washes at appropriate points, based on 70° F processing temperature.

The times given above are to be considered approximate and will vary slightly for individual processing machines, depending upon conditions of agitation, etc. The film carries an anti-halation backing which is removed automatically during processing. 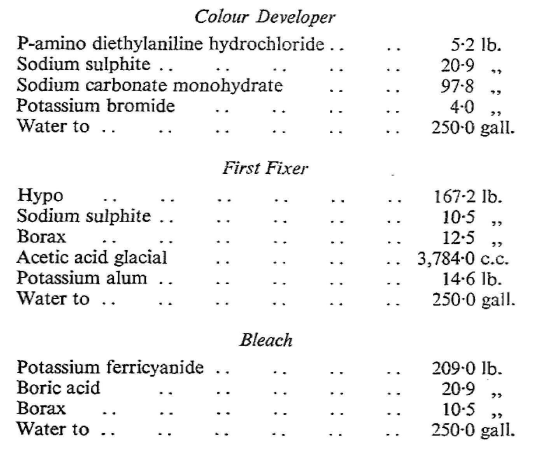 The above information has been included by courtesy of Du Pont de Nemours and Company, to whom the writer is gratefully indebted.

* If sulphiding of track is employed, this may occur after a 1-minute wash following Step No. 5. Processing then proceeds to Step No. 6.”

DuPont Color Film, Type 275, was a three-color subtractive color print film announced by E. I. DuPont de Nemours and Company, Inc., in 1949.39 The unique characteristic of this film was that a synthetic polymer was used in place of gelatin as a vehicle for the silver halide grains. This polymer served the dual purpose of binder and color forming coupler.

Shortly after its introduction this film was adopted by Consolidated Film Industries for use in their three-color Trucolor process. Prints produced on DuPont Color Film, Type 275, and on its safety film counterpart, Type 875, have “Color by Trucolor” in their titles.40 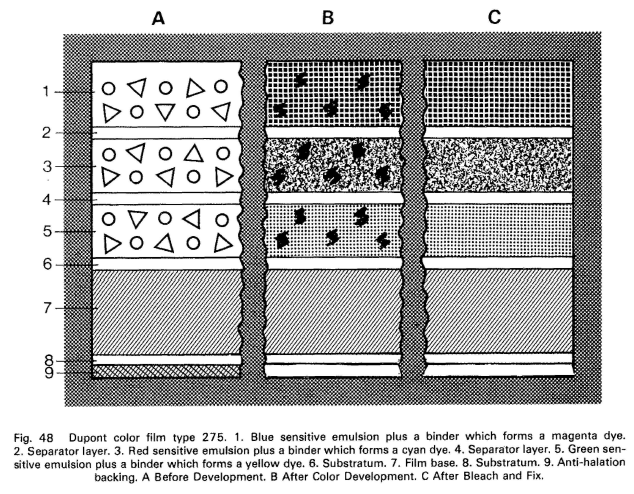 After exposure the print film was developed in a dye coupling developer to form a silver plus dye image in each layer. Following a wash the film passed to the first fix where all the unexposed silver was dissolved. Once more it was washed, then it passed into a bleach which converted the silver image into silver ferrocyanide. This was followed by a wash and a second fix which dissolved the remaining silver, a final wash and drying.41

The processing cycle and formulas for developing DuPont Color Film, Type 275, were as follows: 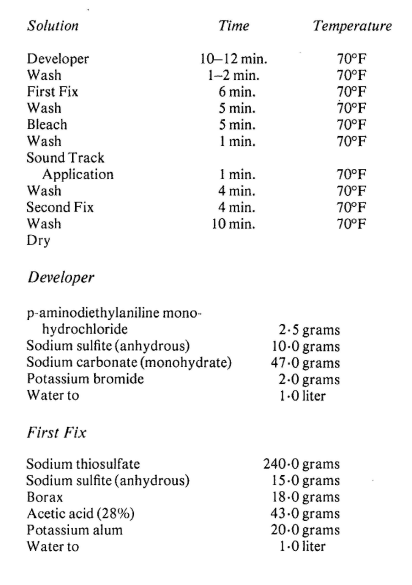 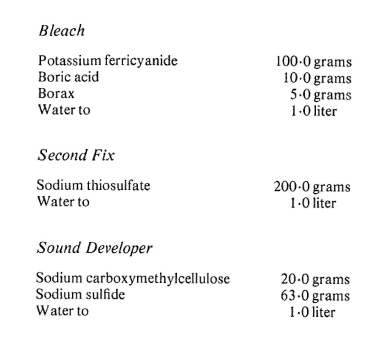 39 Jennings, A. B., Stanton, W. A, And Weiss, J. P., “Synthetic Color-Forming Binders for Photographic Emulsions,” Journal of the Society of Motion Picture and Television Engineers, November, 1950, pp. 455-476.

41 Jennings, A. B., et al., “Synthetic Color-Forming Binders for Photographic Emulsions,” Journal of the Society of Motion Picture and Television Engineers, November, 1950, p. 470.”