Zoechrome samples from the Kodak Film Samples Collection at the National Science and Media Museum in Bradford.

“An English company, Zoechrome, whose film has not yet been seen in public, has attacked this problem in a most ingenious way, and has, moreover, succeeded in achieving something on which Technicolor are still working; that is, putting three colours on the same side of the film. A camera is used having four lenses cemented in a group (three quite small, and one ordinary size) which photograph four different images of the same aspect at once. The three small lenses have behind them the three necessary colour screens, red, green, and violet-blue, which photograph their respective colour factors simultaneously, but not overlapping on to the space of the one ordinary sized picture. Each colour screen picture is one quarter the size of an ordinary film picture. The fourth lens gets over the trouble mentioned previously, of lack of definition, by photographing an ordinary black and white picture which acts, as it were, as an optical key on which to superimpose the colour images. The fact that four lenses are used instead of one, and that a very ingenious modification has been made to the shutter, makes it possible to do away with the extra lighting usually associated with colour work. The camera can be turned at the speed and under the same lighting conditions as an ordinary cinecamera – a tremendous advantage over other methods. The illustration shows a Zoechrome negative. The coloured positive, of course, in a black and white illustration, would be no different from an ordinary black and white film.

The negative is developed in the usual way, fixed and dried. In printing Zoechrome have again departed radically from ordinary procedure. A projection printer is used, which projects the images from the negative on to the positive, which is in another mechanism, much as an ordinary enlarger treats a snapshot, or a magic lantern throws a slide on to a screen. The black and white key picture of normal size is printed first, the negative mechanism pulling down two picture spaces to the positive mechanism’s one. The black and white length is then developed to a half-tone depth, that is to say, to form a grey and white picture, with no real black, but only varying shades of grey. It is then fixed, washed, dried, and varnished. The same film is then recoated with fresh light-sensitive emulsion on top of the grey image, and the first colour-sensation negative is enlarged from quarter size to full size, and perfectly superimposed on the top of the half-tone pictures along the whole length. This is then developed, fixed, washed, and toned the complementary colour to the screen through which it was photographed. Thus the negative taken through a red screen produces a positive in varying intensitives of blue-green. The negative of the violet-blue component gives a yellow positive, and that of the green component a magenta positive. It will be seen from the above that each toning colour contains the spectrum minus the colour of the photographing filter.

When the first colour positive has been toned with what is known as a basic dye, as distinct from an aniline dye, the dye is mordanted or fixed, and the silver image is then dissolved out, leaving only the dye behind, which is absolutely transparent.

A second coat of varnish is applied when the film is dry, and a further coat of emulsion applied to receive the second colour; and after this has gone through the same process, yet a third emulsion is applied on which the third colour component is printed in its complementary tone.

All this sounds very complicated, but actually it is automatic throughout, and the final result is no thicker than an ordinary black and white positive, whereas it has everything on one side of the film. It needs no extra strength of light to project it, because all the colours are absolutely transparent, being only dyes and not part of the detail or definition of the picture. All the detail and definition of the picture is contained in the half-tone key; so that the colours are only asked to do their normal job, i.e. to colour the parts which should be coloured.

Imagine it. Four separate emulsions, four separate printings and developings, and three layers of varnish so thin that the finished film is no thicker than an ordinary single-emulsion film.

This process is inevitably slightly more costly than that of ordinary film production, but it entails less anxious ingenuity than the Technicolor process involves.”

“T. A. Mills patented a three-colour process in September 1921, which was demonstrated in 1929 under the name Zoechrome. Mills proposed a four-lens camera, one lens exposing a single, conventionally sized frame and the other three smaller lenses producing three small colour separation images in the space of the adjacent frame, the film being moved on two frames at a time. The alternate black and white full frame exposures were printed by a ‘skip’ printer in continuous sequence on a film, which was developed to give a conventional black and white print. This was varnished and recoated with emulsion and one of the smaller separation exposures was printed by enlargement in register with the existing image. The new print was dye-toned in the appropriate colour, varnished and recoated, and the second negative set was enlarged onto it, the print dye-toned and revarnished to receive yet another emulsion, and another printing and dye toning. This would seem to be doing things the hard way but the process worked adequately enough and reached the stage of trade demonstrations where it was described as a ‘sound business proposition’. A reviewer said that the colour was ‘as good as any I have seen’. It was claimed that £40,000 had been spent on the development of the process and in 1932 it was offered for sale. There were no takers.”

“1920-9. – T. A. Mills was the inventor of a process known as ” Zoechrome ” (E.P. 172,714, 1920). One full frame was succeeded by three small pictures occupying the space of a normal frame. All four pictures were exposed at the same time. The three small pictures were exposed through tri-colour filters, while the large picture was a normal panchromatic record. The black-and-white negative was taken with an F./3·5, 3-inch lens, while the small negatives were made with three lenses of about F./4·0 and of shorter focus, bunched together to reduce parallax, and placed immediately below the main lens. All four lenses were mounted together for focussing. In printing, the alternate full images of the negative are printed in succession; the positive is developed as usual, varnished and then recoated with emulsion. One of the small images is printed by enlargement in register with the full-sized image, developed and dye-toned. The film is again varnished and recoated with emulsion, and the cycle of operations is repeated for the two remaining colours. This process is no longer being worked commercially.”

Zoechrome was developed by Thomas Albert Mills over an extended period. He first patented a successive-frame system for two- or three-colour cinematography in December 1911. This was a complicated system in which, for two-colour, successive images were captured through blue and orange filters. After printing the successive frames were toned blue and orange and then the film was coated with emulsion on the back and the same images printed one frame out of register and toned identically, so behind each blue-toned frame on the print was an orange-toned frame. Zoechrome Ltd was registered in February 1912 with a nominal capital of £15,000 in £1 shares to acquire the rights Mill’s patents. From 1921 the process was significantly revised and by the time it was first demonstrated in 1929 it used one large and three smaller lenses. Successive frames were registered, one through the large, normal-sized lens creating a full-frame picture, and the next through the three smaller lenses resulting in three small images registered on a normal-sized frame. This created a negative which alternated between one full-sized frame and one frame with three smaller images. Each single frame image was printed to produce a black-and-white print of the full-frame image. This was then fixed with varnish and then recoated with emulsion. One of the three smaller images was then enlarged and printed over the full-frame image in register. The print was then dye-toned with the correct subtractive colour, and the process repeated with the other two colours. The function of the single, black-and-white full-frame image was effectively to override any parallax issues from the three smaller images, the larger one being much clearer and more dominant.

The first public demonstration of the process took place on 12 March 1929 at the New Gallery in London, featuring footage of the sea, country lanes and flowers. Despite a favourable review the following day in The Times, the company appears to have never traded and an official receiver was appointed in April 1931. When the process was offered for sale in 1932 there were no buyers and it ceased development. 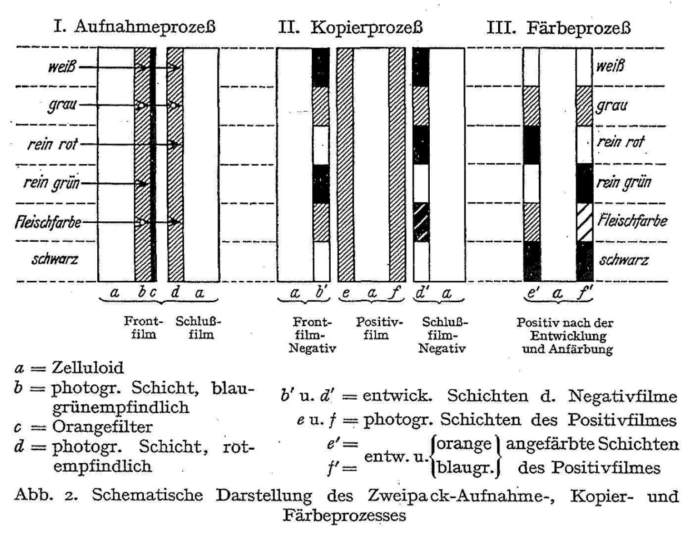 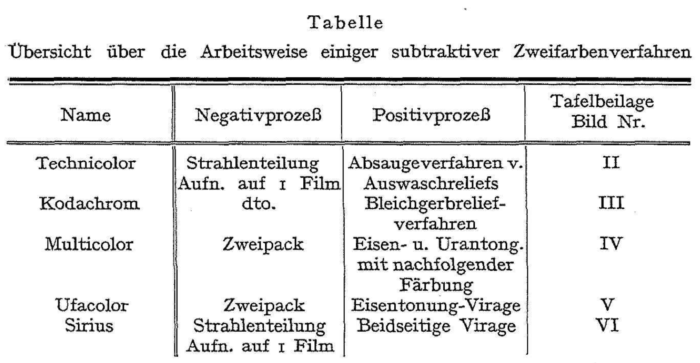