A multilayered incorporated-coupler duplicating color film which by reversal processing produces duplicate color negatives directly from the original negative. The spectral sensitivity and image dye absorption characteristics are similar to those of Eastman Color Intermediate Type 5253 permitting intercutting with the original and other color negative duplicating films. With this new film it is necessary to place the original base to emulsion in an optical printer when exposing the duplicate. This is required to preserve orientation as well as to introduce effects or change picture format, also modified techniques are required for fades and dissolves. An additional requirement for the use of this new film is the installation of a new processing machine and process CRI-1.

“In the 1920’s the first black-and-white duplicating films specifically intended to improve the final print were introduced. The inception of color motion pictures in no way altered the need for high-fidelity duplicating but did enormously complicate the problems of edge effects, increased graininess, tonal and color distortion, all summed up under the general description “dupiness.”

Where the original image is a color negative, the traditional duplicating materials have been a combination of a duplicating positive film and a duplicating negative film.

In the Eastman Color System duplicate negatives were prepared by making color separations on panchromatic black-and-white film and printing these onto a color duplicating negative film. This approach is still used today, especially when an archival record of the color picture is desired. In 1956 it was reported to the Society that advances in emulsion technology allowed for further simplifications of the duplicating process.*

A single film, Eastman Color Intermediate Film, Types 5253 and 7253, was designed to be used at each stage of the two-stage duplicating cycle. Proceeding from the negative to the final print, three laboratory stages are necessary where format changes or special effects are introduced or where a negative printing master is desired to protect the camera negative original.

Advances in emulsion technology have now permitted design of a film which, by reversal processing, produces a duplicate negative in one printing-processing operation thus improving laboratory efficiency. The elimination of one printing step improves the graininess, color reproduction and sharpness of the final print. This new 35mm and 16mm film is known as Eastman Color Reversal Intermediate Film, Types 5249 and 7249.

A basic sensitometric requirement of such a reversal film is that it have unit printing contrast when used in conjunction with Eastman Color Negative Films. The speed relationship among the three emulsions should allow for reasonable subtractive printer filter packs or additive printer settings when used with a normal color negative original (Fig. 1). 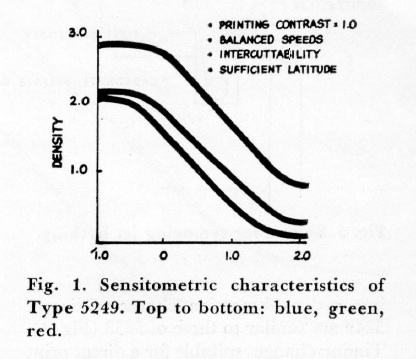 Another requirement is that the toe shape and minimum densities allow for making duplicates which can be intercut with the original without significant tonal distortion. These minimum densities come about because of the colored couplers which produce color-corrective masking similar to that which is achieved in Eastman Color Negative and Intermediate Film.

It is important that this film have straight-line characteristics which extend over a long enough exposure range to accommodate the full density range of the original. The shoulder characteristics and maximum densities are selected to fulfill this latitude requirement. Requirements include sufficient sensitivity to allow for its use in existing printers. That this requirement is met is illustrated by a comparison where the 5249 and 5253 emulsion characteristics are plotted on a common scale (Fig. 2). The practical speed of Eastman Color Reversal Intermediate Film, Types 5249 and 7249 is about six times that of Eastman Color Intermediate Film, Type 5253. 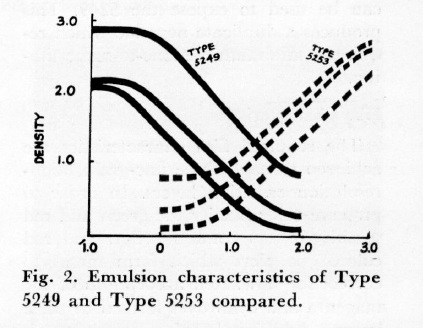 Spectral sensitivity on the three emulsions is selected to produce proper printing contrasts and minimum interaction between the different color records (Fig. 3). The spectral sensitivity and image dye absorption characteristics of 5249 are similar to those of 5253 (Fig. 4). Timing changes suitable for a direct print can be used to expose the 5249. This produces a duplicate negative which requires a minimum of scene-to-scene timing. 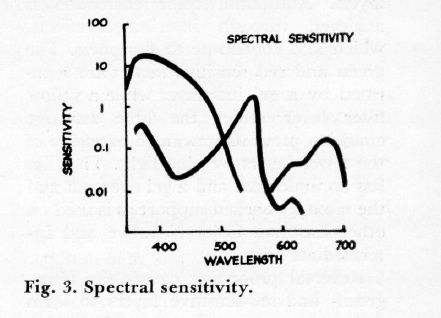 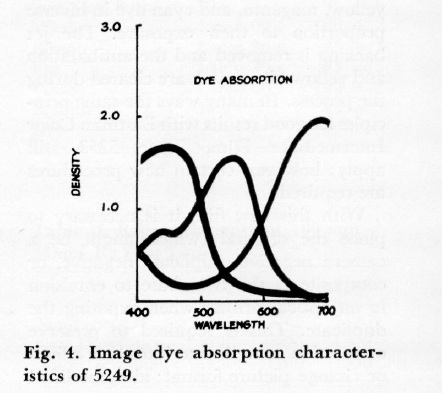 The required film characteristics are achieved through three fine-grain, high-resolution emulsion layers. In order to preserve color fidelity the green and red sensitive layers contain yellow and red colored couplers which form masks to correct for unwanted absorptions of the magenta and cyan dyes formed in these layers. Additional color correction is achieved through interimage effects, which also contribute to sharpness. The green and red sensitive layers are separated by a gel interlayer while a yellow filter layer under the blue sensitive emulsion prevents unwanted exposure of the lower layers by blue light. The film has an undercoat and a gel overcoat and the same jet-backed support as is used on other Eastman Color Negative and Intermediate Films.

Reversal processing causes the blue-, green- and red-sensitive layers to form yellow, magenta, and cyan dye in inverse proportion to their exposure. The jet backing is removed and the antihalation and yellow filter layers are cleared during the process. In many ways the same principles for good results with Eastman Color Intermediate Film, Type 5253 still apply; however, certain new procedures are required.

With this new film it is necessary to place the original (which might be a camera negative, duplicate negative, or composite of the two) base to emulsion in an optical printer when exposing the duplicate. This is required to preserve orientation as well as to introduce effects or change picture format; also, modified techniques are required when introducing certain optical effects (such as fades) at this stage.

A typical subtractive optical printer set-up for a normally exposed negative includes the use of the Wratten 2E filter in the basic pack and the use of a heat-absorbing glass. Exposure times between 1/5 and 1/250 s can be used without introducing contrast changes due to reciprocity effects. Exposed 5249 duplicate negatives should be processed as soon as possible to avoid latent image changes. Where delays between exposure and processing of the 5249 are inevitable, zero degree F storage is recommended.

Eastman Color Reversal Intermediate Film, Types 5249 and 7249 is processed in Process CRI-1 (see Table I). A system for removing jet backing must be included and a 2-min, 30-s time in the first developer is required. The backing is removed very successfully as shown in Fig. 5. The film leaves the neutralizer and enters a carbonate-sulfate dip for a few seconds then passes into the removal cabinet where balanced water sprays wash off the backing. The base is buffed, sprayed, buffed, sprayed and squeegeed, and returned to enter the first developer. The baffles in the cabinet (Fig. 6) prevent the water containing jet backing particles from contacting the buffer plush, thus preventing the formation of jet backing deposits that might scratch the film. 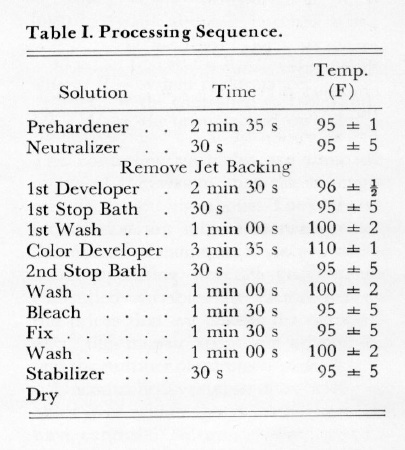 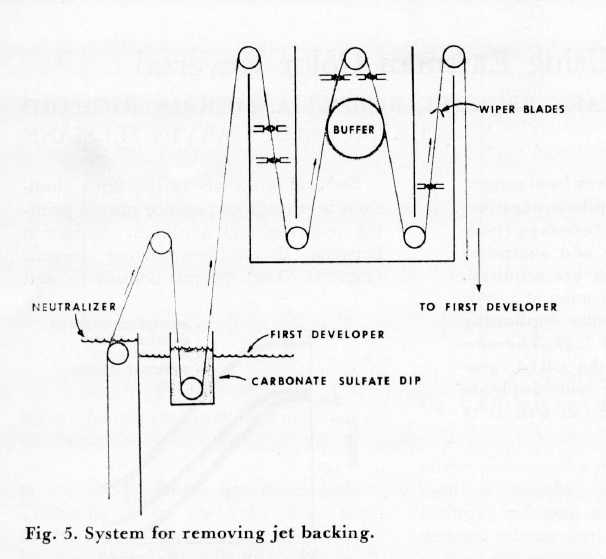 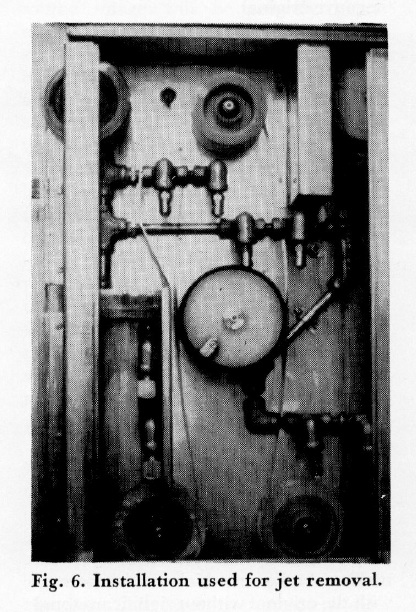 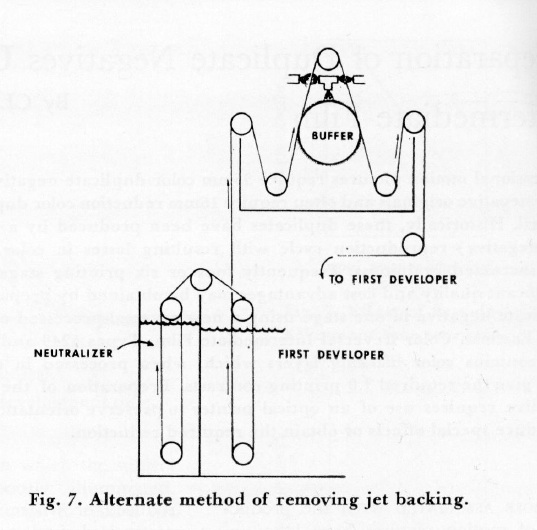 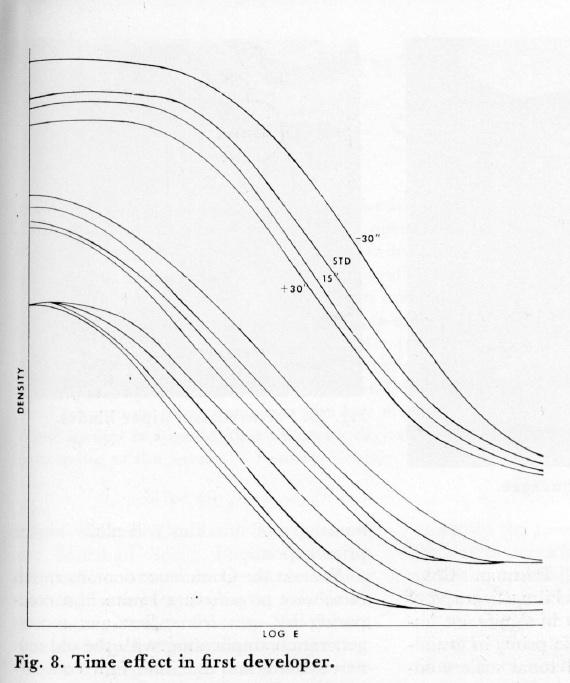 To prevent streaks and scratches, no wiper blades or squeegees are used on the prehardener crossover. This results in a high carry-over rate into the neutralizer and requires more rapid replenishment to maintain an adequate neutralizer concentration. Compared to Ektachrome type films requiring ME-4 chemistry, 5249 requires less replenishment in the first and color developers, Table II. Reversal Intermediate Film equilibrates at a low iodide level in the first developer and is quite sensitive to iodide changes (Fig. 9). For this reason, other films that equilibrate at high iodide levels such as Ektachrome MS, Ektachrome R, and Ektachrome EF must not be processed in the CRI-1 first developer as their seasoning effects will raise the iodide equilibrium level. 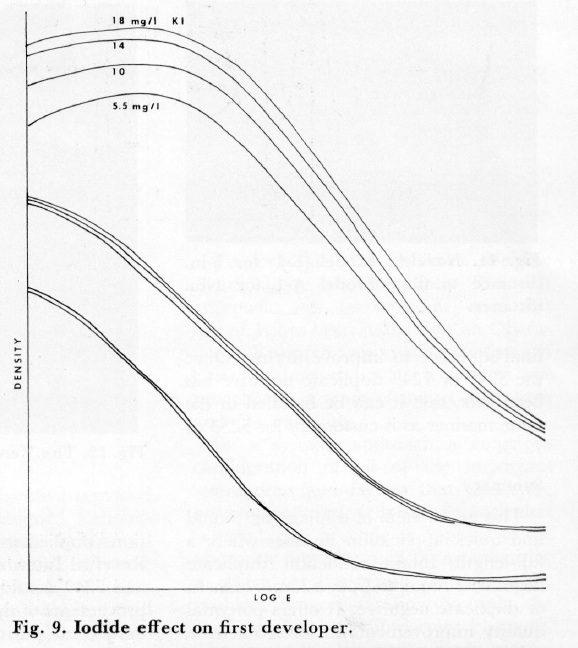 Agitation is directly related to uniformity in processing Reversal Intermediate Film. We have found that a high level of turbulation is essential in the neutralizer, first developer, first stop, and color developer. Good uniformity is required because of amplification effects when this film is printed onto Eastman Color Print Film, Type 5385. This turbulation system has spray nozzles (Fig. 10) and a high recirculation rate. The machine has racks where the film is very close to the nozzle and also racks where the clearance is normal. 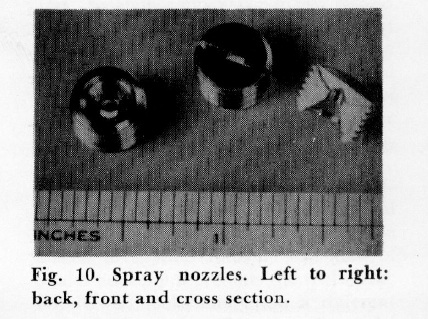 Two types of nozzles have been designed to handle these differences. The only difference between the two designs is that of the drill head angle used to make the final spray hole; the more pointed the drill, the wider the spray coverage. The nozzle we designated model E-1 is designed for film to nozzle distances of 1/2 in, while model A-1 is designed for 1 in (Fig. 11). The effectiveness of such a system is dependent on the turbulator pressure at the spray nozzle. We use 16 lb/in2 gage. The spray pass frequency should be approximately every two seconds of film path and the flow rate through each nozzle about 1 liter/min. 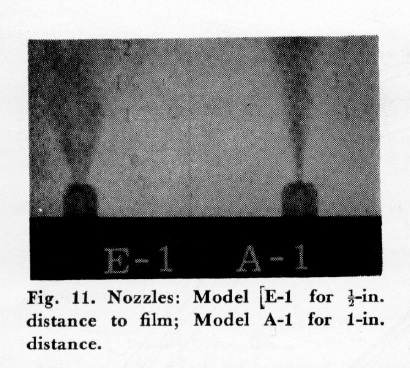 To summarize, turbulation is most important in the first developer, color developer, first stop and neutralizer when processing Eastman Color Reversal Intermediate Film.

The final squeegee also plays an important role in uniformity. Water carried into the dryer on the film causes very obvious watermarks. We have found that a very carefully adjusted Venturi squeegee is essential (Fig. 12). 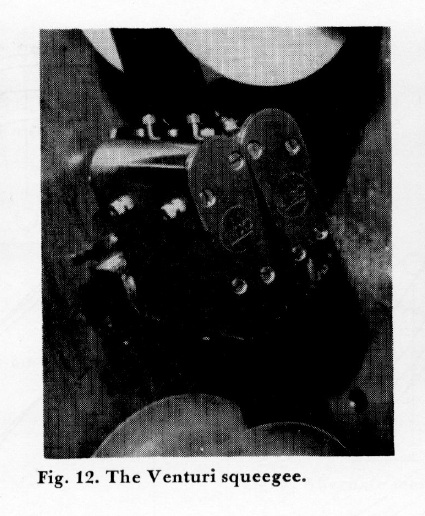 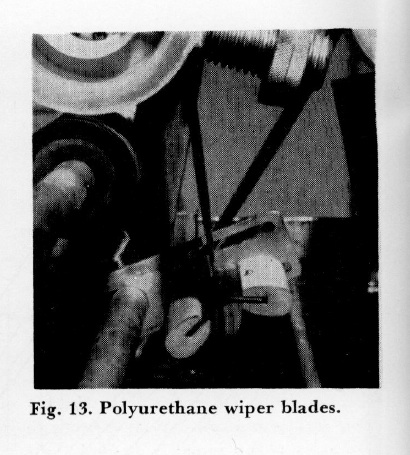 Important requirements to process Eastman Color Reversal Intermediate Film are (1) increased turbulation; (2) backing removal; (3) adequate drying facilities to suppress shoreline; (4) wiper blades to minimize carry-over; and (5) final squeegee to improve drying. Once the 5249 or 7249 duplicate negative has been processed it can be handled in the same manner as is customary for 5253 or 7253.

Note: At the Conference demonstration films were projected: a 16mm film comparing by split frame first and second generation duplicating with the old and new systems and a 35mm film comparing by split frame the new duplicating system print with a direct print and with a duplicate print made by the old system. Also, full-frame duplicate prints from various originals on Types 5251, 5254, 5253 and 5249 were projected.”