A new Gevacolor print film has been introduced which, by virtue of its improved graininess relative to Gevacolor print film Type 985, is considered to be especially suitable for reduction printing to small formats. The new film, known as Type 986, retains the excellent sharpness and color rendition of Type 985 print film. The universally known processing sequence based on color developer CD2 with 2-amino-5-diethylaminotoluene monohydrochloride as the developing agent is suitable for Type 986. Processing can also be accomplished with a bleach-fix bath at up to 80°F (26.7°C), and when this is done with super-8 film – with either optical or magnetic soundtracks – total processing time is about 12 min. Sensitometric and modulation transfer curves are given.

In the manufacturing of color positive films, a general trend to greater productions of small-format films (16mm, 8mm and super-8 films) has been noticed. With these formats, information must be condensed on a smaller film area, and consequently requirements with regard to sharpness and graininess are more severe.

A few years ago, Agfa-Gevaert introduced Gevacolor print film Type 985. The processing of this emulsion was based on color developer containing 2-amino-5-diethylaminotoluene monohydrochloride.

In 1974, an improvement on print film Type 985 – Gevacolor print film Type 986 – was introduced. The sharpness, high sensitivity and color saturation characteristics of Type 985 were maintained. A major improvement in granularity was achieved, however, which made this emulsion suitable for all applications, but especially for small-format cinematography.

Many papers have been published about the problem of transfer of granularity throughout the printing procedures. The basic relationships are common concepts of communication theory; they have been adapted to the case of photographic granularity by Jones1 and by Zweig.2

The transfer of the granularity of a negative film to the positive print, using contact printing or 1:1 optical printing, has been described in detail by Doerner.3

γp = gamma of the positive film

WP(f) = Wiener spectrum of the granularity of the positive film

If we accept that WP(f) is normally much smaller than

Extensive studies have shown that the former equation is a rather special case of the general formula:

where f refers to the spatial frequencies in the print plane and R to the reduction factor, R being greater than one when the format is reduced. This equation allows us to calculate the influence of the positive material itself in the final print (for different qualities of negatives and for different printing procedures and reduction ratios).

then a high value of a means that we have negative with a high granularity, printed by means of a printing system having a good sharpness.

Combining the former formulas, we can write: 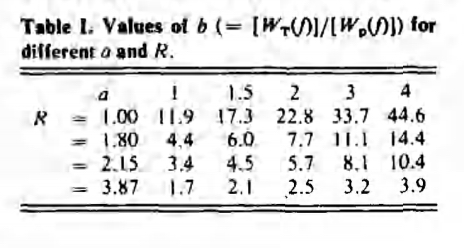 Because what was wanted was a print film designed especially for small formats and reduction printing, a major design goal was to improve the granularity of print film Type 985 without detriment to its other characteristics.

Gevacolor print film Type 986 is a multilayer film for printing color release prints from masked color negatives or from any color duplicating stock. The film basically consists of three separate emulsion layers coated on a safety base. These emulsion layers are sensitive to green, red and blue light respectively. They contain appropriate color couplers which on development will produce respectively a magenta, a cyan and a yellow dye image.

A protective gelatin overcoat is placed on top of the emulsion and a new black antihalation layer is coated on the base of the film. The latter consists of a removable resin containing carbon black, which is made soluble by the conventional mildly alkaline prebath. The schematic structure of the film is shown in Fig. 1. 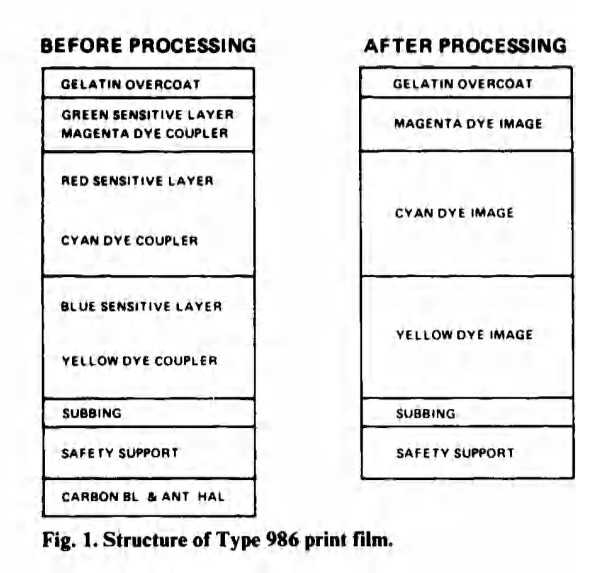 The dry thickness of the green sensitive layer has been reduced to 3.2 μm (or 0.126 mils), compared to the 4.2 μm (or 0.166 mils) for Type 985 print film. This is especially favorable for sharpness characteristics.

Selection of emulsion characteristics such as an appropriate grain dispersion, emulsion thickness and AgX/gelatin ratio, in combination with carefully chosen dye couplers, has given Type 986 a substantial improvement in granularity compared to Type 985 (Fig. 2). 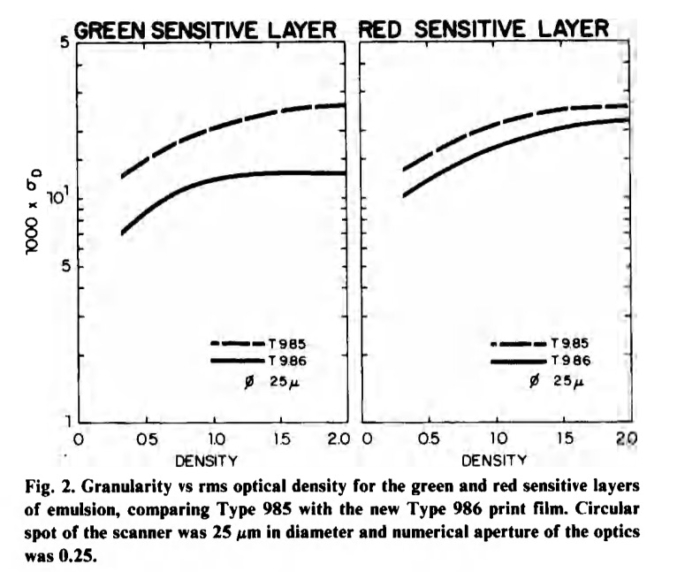 The improvement in granularity, being especially noticeable in the green sensitive layer, makes the film, according to theory, especially suitable for small formats and reduction printing. By the use of sharpening dyes (very efficient light absorbers), computed so as to obtain a maximum gain in sharpness with a minimum loss in total sensitivity, the already high sharpness of the film, especially in the green-sensitive layer, has been improved further as can be seen in the MTF curves in Fig. 3. 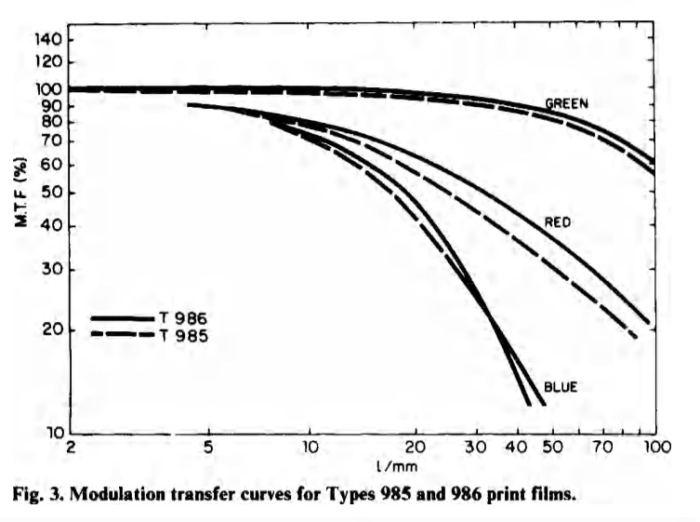 Since about 60% of the total image quality in a color film is determined by the magenta image, the reason for the high quality of the images on Type 986 print film is evident.

The general shape of the sensitometric curve of the three layers is given in Fig. 4. As with print film Type 9854 the measurements were made with a Macbeth TD 203 densitometer equipped with Status A filters. 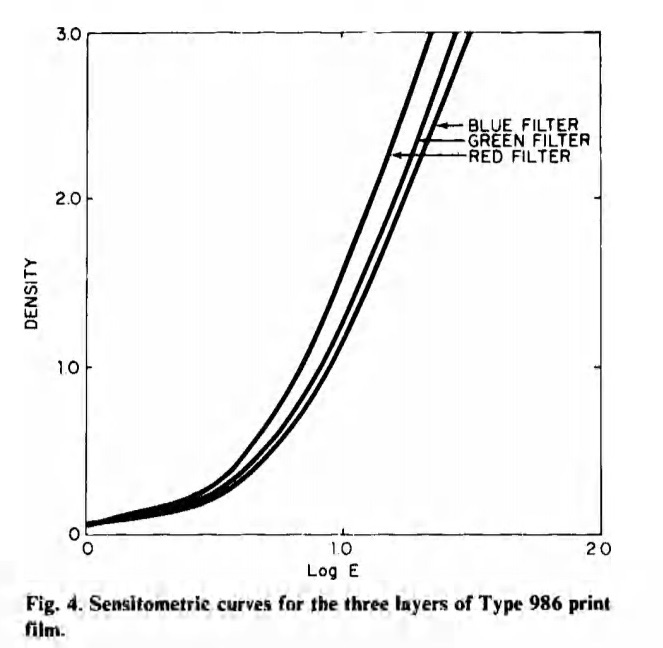 The color dyes have been carefully chosen in order to achieve “the gray standard” condition. That means that the color image, subtractively formed, if projected with a xenon light source, matches the visual perception of a gray scale. The proportional quantities of the dyes are determined by the spectral characteristics of the dyes, the energy distribution of the light source and the spectral sensitivity of the eye of the observer. Any deviation from the sensitometric condition outlined in Fig. 4 results in a disturbance of the gray color balance.

The speed of the three emulsion layers has been fixed so that printing with commercially available additive and subtractive printers does not cause any practical problems. Thus the necessity for corrections is minimized when prints are to be made from masked color negatives or intermediates. 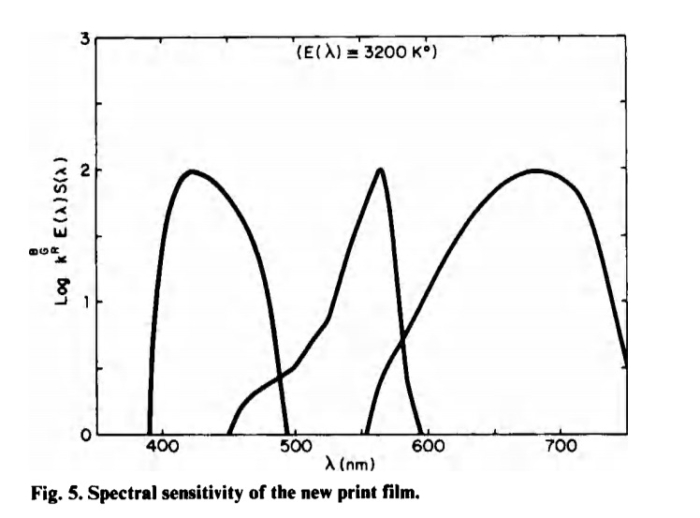 Figure 6 shows the spectral density of Gevacolor print film Type 986 for visual gray at a density D = 1.50. The selected color couplers guarantee an excellent color rendition and a good dye stability after processing. 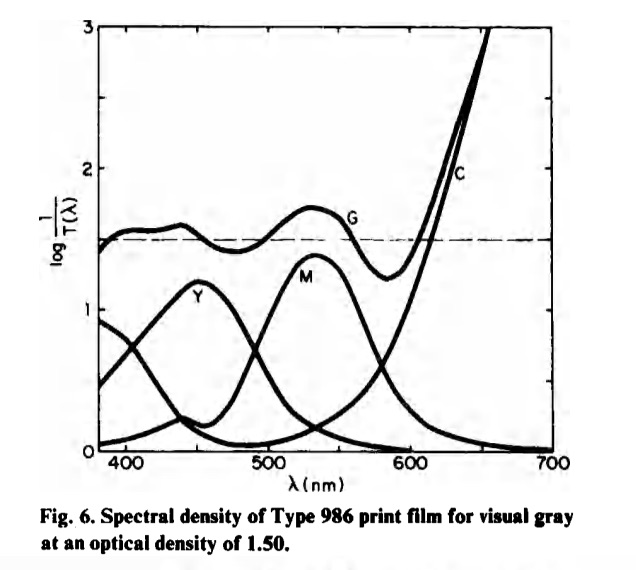 For information about color rendering, dye stability and soundtrack printing of Type 986, the reader is referred to an earlier Journal paper4 concerning Type 985 print film, since the two films are comparable in these respects.

Gevacolor print film Type 986 is fully compatible with existing processing systems all over the world. The color developing agent 2-amino-5-diethylaminotoluene monohydrochloride is used. As a rule 75°F (23.9°C) should be considered as the standard processing temperature though practice shows that the film can be processed at 80°F (26.7°C) as well. The sensitivity is not greatly influenced by developing time variations, and the color balance is very well maintained. This is also true for tolerable deviations in the concentration of the most important chemical ingredients.

Print film Type 986 can also be processed in a bleach-fixing bath up to 80° F, which proves to be especially suitable for super-8 film formats. With either an optical or a magnetic soundtrack, the total processing time is about 12 min.

Rawstock Gevacolor print film Type 986 should be stored at a temperature not to exceed 50°F (10°C), but preferably lower if a lengthy storage period is anticipated. Relative humidity should be 50%.

Upon removal from storage, sufficient time should be allowed for the film to reach room temperature before removing the tape from the can. Exposed film should be processed as soon as possible.