Gevacolor Positive, T.953, color print stock is the third member of a family. The first, T.951, was born in 1947, and has gradually been introduced to the European laboratories and film industry. It soon became apparent that this printfilm, although giving satisfactory and pleasing results, needed
improvement, especially for definition and color saturation.

In these three types of film, the dyes are formed by the reaction of the oxidized products of the developer with color couplers, incorporated in the three emulsion layers. To prevent diffusion of these couplers, during coating and processing, their molecules are given during synthesis an alkyl chain tail, containing 12 to 18 carbon atoms. It is generally assumed that molecules of this kind show a tendency to troop together in micels of such size and form that their diffusion rate in a gelatinous layer is brought within extremely low and safe limits.

These molecules group back to back in a formation that allows the presence of the largest possible number of hydrophilic groups at the surface of the micels. In these conditions, the reactivity of the individual molecules is generally preserved.

The structure of each of these three types of film is given in Figs. 1, 2 and 3. 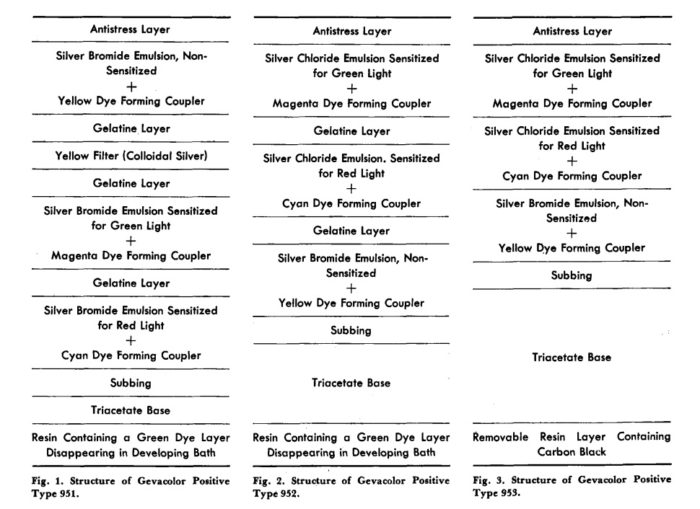 The structure of T.951 is a straightforward or classical build-up. On a triacetate base are coated in succession:

(1) a silver bromide emulsion-sensitized to red light and containing a coupler giving a cyan dye;

(2) a green sensitive silver bromide emulsion containing a coupler for the magenta image;

(3) a yellow filter layer containing colloidal silver dispersed in gelatine and intended to absorb the blue light; and

(4) a nonsensitized silver bromide emulsion, containing a coupler for the yellow dye.

To complete the film, the four basic layers are isolated by plain gelatine layers to overcome interaction of the couplers and hence contamination.

The structure is protected against abrasion by an anti-stress layer. On the base side a resin layer is coated containing a green dye as protection against antihalation. This layer disappears in the developing solution.

As mentioned before, the resolving power of this material was rather low, in fact, substantially lower than that of standard black-and-white print-film.

A substantial improvement in this respect was brought about by the introduction of T.952, in which the position of the layers was reversed, as proposed by Dr. Bela Caspar as far back as 1936.* Advantage is taken of the low original sensitivity of silver chloride emulsions, which is confined to the far blue and ultraviolet zones of the spectrum. This property is used to avoid the built-in yellow filter and to reverse the order of the layers.

The layer producing the magenta image, which roughly contributes 60% of the definition, becomes the uppermost layer where light scatter is extremely small.

The cyan image, responsible for 30% of the definition comes second, covered only by the almost transparent silver chloride emulsion layer, sensitive to green light. The layer producing the yellow image which accounts for only 10% of the definition is relegated to the back seat.

As to T.953: Lack of definition has always been a major problem in color photography, because blurring of two adjacent areas of distinct color will produce a shift in hue. Also, the resolving power of color negatives was substantially lower than that of their black-and-white counterparts, until the quite recent introduction of improved color negatives. Therefore, research was directed towards an improvement of definition.

The resulting material, T.953, is basically built up like T.952. Most of the advance has been achieved by adding to the three layers a dark-blue combination of dyes which decompose in the developing solution. The black antihalation layer proved to be of value in improving the resolving power. The low electrical resistance of this layer protects the material against electrostatic dangers: dust attraction and discharges.

Spectral Sensitivity: In Fig. 4 are shown the spectral sensitivity curves of the three emulsion layers used. To be noted is the relatively very low sensitivity of the red and green sensitive layers in the far blue end of the spectrum. Because of this property, no practical difference can be found between prints made from a same negative with and without an ultraviolet light absorbing filter, such as U.V. Special or Wratten IIB filter. Dropping this filter results in a gain in speed of about 0.30 log E for the blue sensitive layer. 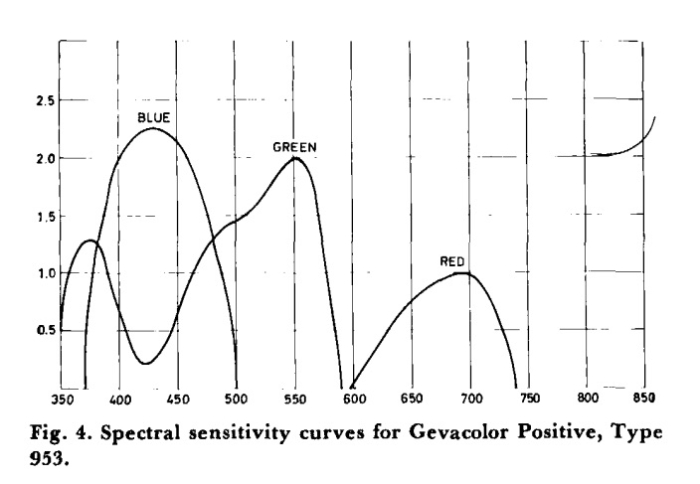 Absorption curves of the dyes produced in the three layers of T.953 are given in Fig. 5. The magenta dye was chosen for its extremely low blue absorption and its very steep fall-off toward the red end of the spectrum, resulting in bright reds and very luminous blues. 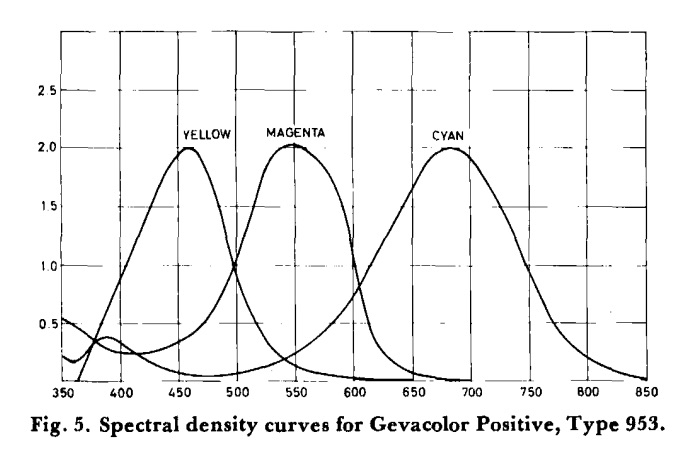 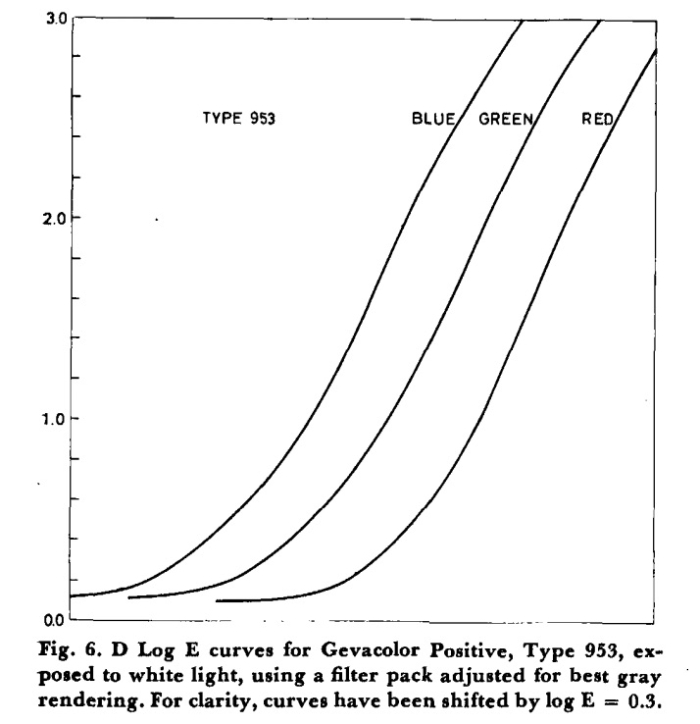 In Figs. 7, 8 and 9, respectively, are shown density-vs.-log E curves of a strips exposed respectively through the Gevaert red filter (R678), the Gevaert green filter G527A and the Gevaert blue filter B478. Interference from companion layers does not occur within the normal exposure range. The low value of the slope in the unwanted absorption curves indicates the quality of the dyes chosen. 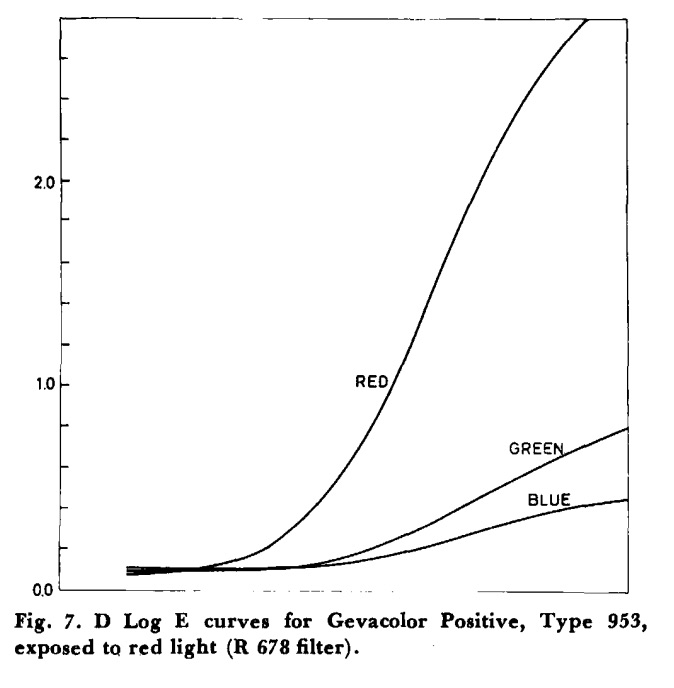 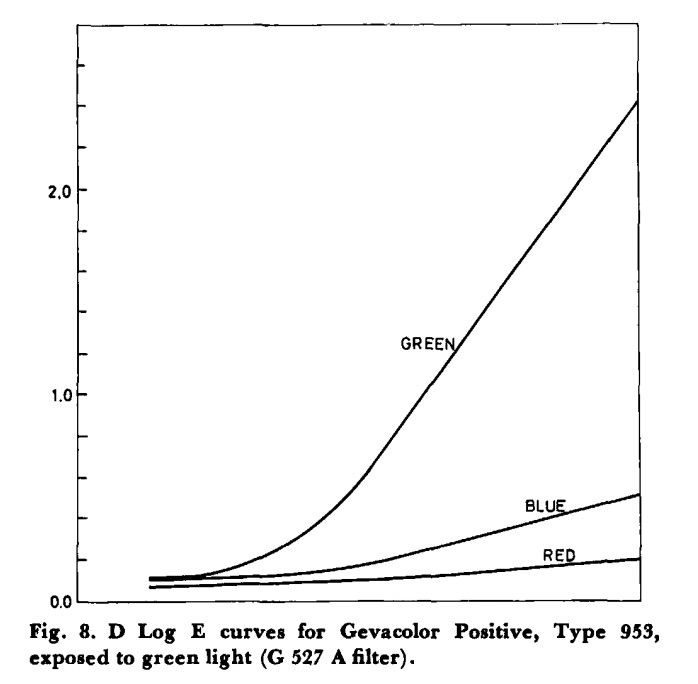 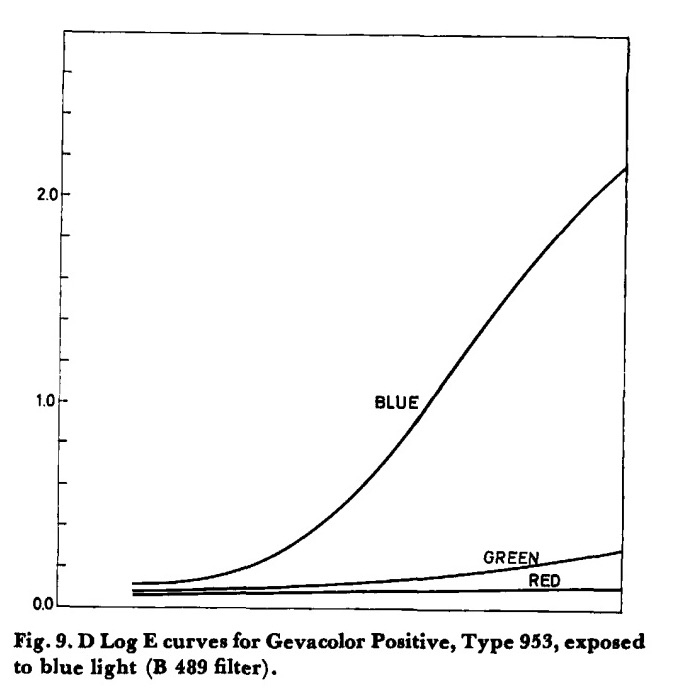 Contrast is adjusted to a value of about 3.00 which is generally accepted as a compromise between the imperative of high contrast, by which saturation and definition are enhanced, and that of acceptable tone rendition, especially in faces.

The speed is adequate for most continuous and step printers using either the subtractive or additive type of light control.

Darkroom Illumination: The spectral sensitivities of the magenta and cyan layers have been chosen to show a low situated at 5890 A, corresponding to the dominant wave-length of sodium vapor lamps. The other wavelengths produced by this source can be cut down, without substantially affecting visibility, by using appropriate filters such as GEVINAC X 592.

Soundtrack Printing: For best definition, it is recommended to confine the exposure to the two top layers. The density of the track, obtained by redevelopment of the bleached silver of these two layers, provides excellent sound rendition. Negative and positive track densities for optimal results can be found by making routine intermodulation tests for variable-density tracks, and cross-modulation for variable-area tracks. The Gevaert G5 or any selective yellow filter will restrict the action of the sound printing light to these two top layers.

The comparatively recent introduction of monopack color materials in the motion-picture industry and the continuing research and development in this field preclude at this time a complete standardization of processing conditions.

Fortunately, however, for most of the operations in color processing a de facto standardization does exist: for instance, backing removal, fixing, bleaching and sound redevelopment procedures. Consequently, the processing of the Gevacolor Positive film T.953 has been adjusted to these existing practices.

The composition of the developing bath is a parameter that may be standardized at a later stage, leaving open possibilities for improvement. Figure 10 gives the processing recommendations for the material discussed at present. 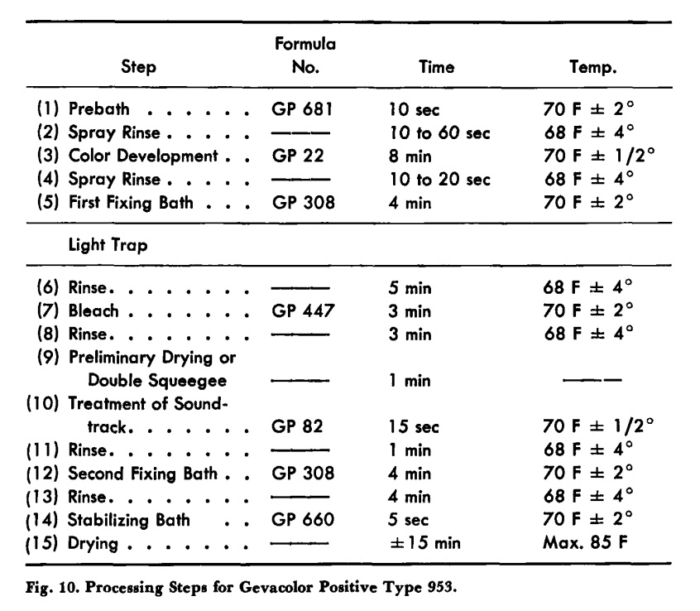 N-N-Diethyl-paraphenylenediamine is used as color developing agent, as in all European and Japanese color systems.

In the Appendix the composition of the various solutions is given in full detail. The recommended processing temperature is 21 C or 70 F. Higher temperatures of up to 25 C or 77 F can be used, but treatment times should then be adjusted accordingly.

For reasons, which we believe have been clearly set forth, it is suggested that the processing instructions of the manufacturer be closely followed. 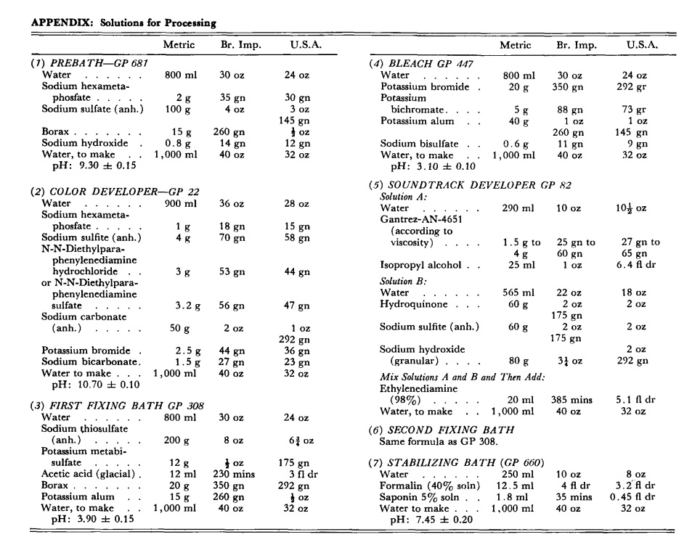