“Today 16mm systems have become more and more important. Their use has steadily increased in all fields. These systems, however, demand higher requirements in film definition than the 35mm systems. In order to meet the requirements of these smaller film formats, a new Gevacolor positive material, T. 9.54, was designed. Owing to better knowledge of the optical and chemical properties of the multilayer color system, together with recent improvements in the technology of manufacturing photographic emulsions, this film has become a reality. In this type it was possible also to include better contrast and dye stability.

T. 9.54, as well as T. 9.53, is a multilayer color film for printing release prints and television prints from color negatives, with or without a mask, either directly or via duplicating stock. This film consists basically of three separate emulsions, each containing an appropriate color coupler.

T. 9.54, as compared to the T. 9.53, has a nonclassical layer orientation. The bottom layer is sensitive to blue light, the middle layer to red light and the top layer to green light.

The dyes are formed by reaction of the oxidized products of the developer with the color couplers, which are incorporated in the emulsion layer.

Figure 1 compares the structure of the T. 9.54 with that of the T. 9.53. The structures are basically the same. The difference between them lies primarily in the optical qualities of the layers. 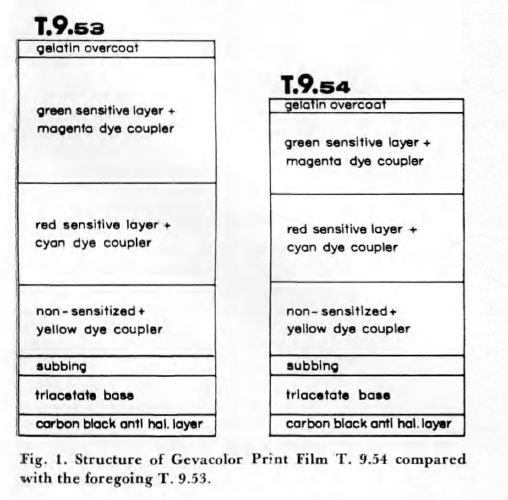 By considering the light scattering functions of the single layers, these optical qualities can be evaluated. These functions imply the determination of diffuse and specular light for reflection and transmission at different angles.

The method, in use at Gevaert-Agfa, for measuring the light scattering functions, was devised for the study of optical modulation transfer functions of photographic layers.1

In Fig. 2 the light scattering function for a coarse-grain emulsion is given. The apparatus in use in obtaining the data is shown in Fig. 3. It is composed of a high-intensity light source with a proper band selection filter, a high-resolution goniometer and a recording photometer. 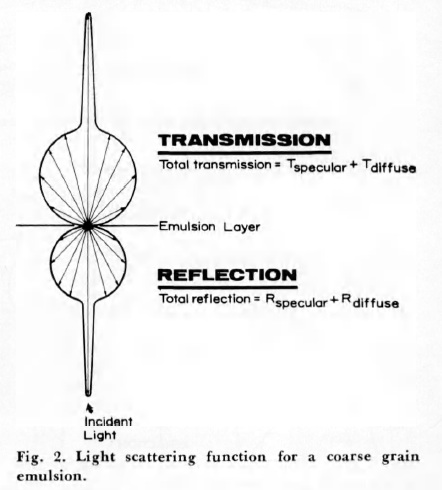 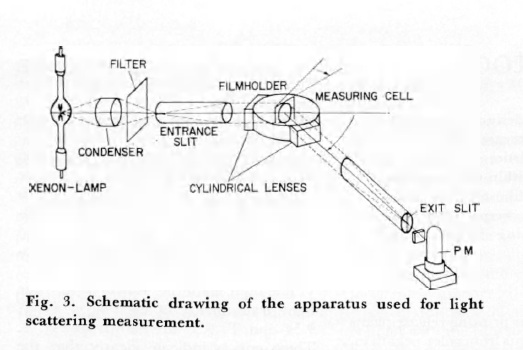 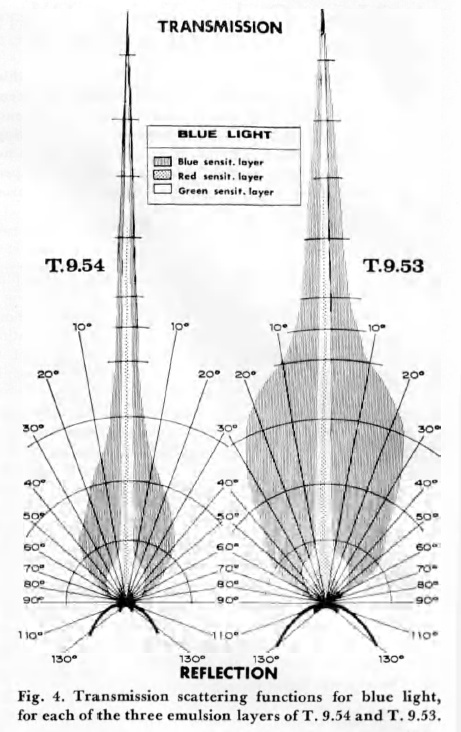 Figure 5 gives the transmission functions for green, red and blue light, for the green sensitive top layer of T. 9.54. The relation between the transmitted specular light and the transmitted diffuse light is very high for green light. This results in a very sharp magenta dye image, which is of great importance. The magenta layer contributes approximately 60% of the total image definition. The specular transmittance relative to the total transmittance for red and blue light should approach 1 in order to preserve the definition of the red and blue sensitive layers lying below. 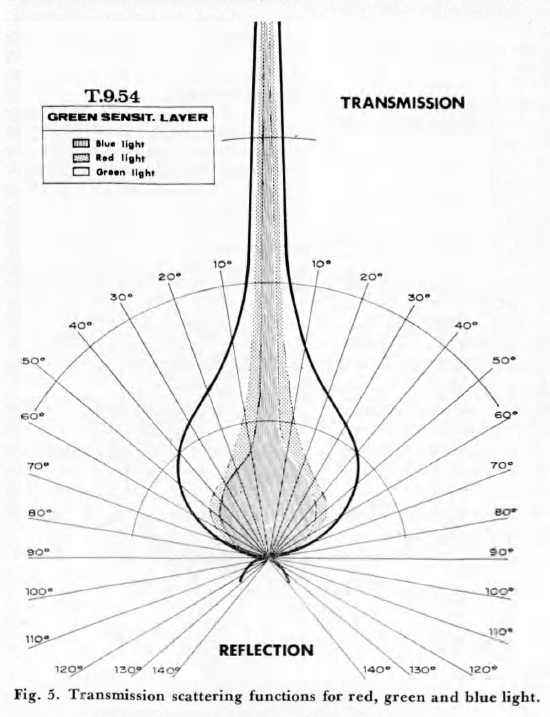 Figure 6 gives the reflection of the blue sensitive layer for red and green light for different angles. The diffuse reflection should be as low as possible. Comparison of T. 9.54 with T. 9.53 shows that this has been achieved to a higher degree in T. 9.54. 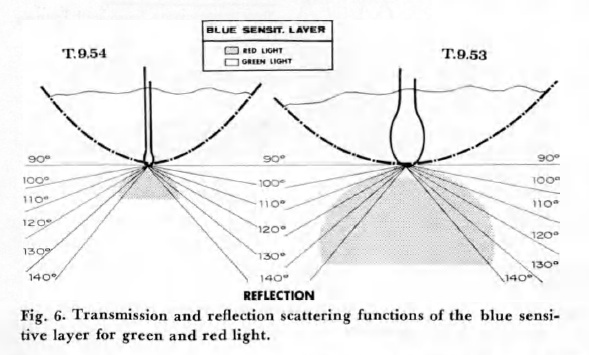 Improvement of the optical characteristics of multilayer materials can be achieved by:

In Gevacolor Positive T. 9.54 film, as well as in the former type, sharpening dyes are also added; however, in T. 9.54 the concentration of the dyes has been increased. The spectrophotometric curves of the sharpening dyes of both types are compared in Fig. 7. The peak density lies in the green region of the spectrum at the wavelength of 545 mµ.

As far as sharpness is concerned, the response of the different layers to incident light may be analyzed by the techniques of modulation transfer. The procedure used by Gevaert-Agfa2 has the following advantages:

Figure 8 gives the MTF curves for Gevacolor Positive films T. 9.53 and T. 9.54. They have been computed from readings of images of sinusoidal targets that have been printed to a neutral gray. The measurements were made selectively, using red, green and blue filters. It may be noted that the new type has been substantially improved, as compared with T. 9.53.

As the granularity of a color film depends on the size of the measuring aperture, when the root-mean-square analysis is applied (σρ), another measuring technique was chosen. In the Gevaert-Agfa laboratories, the photographic granularity of color films is analyzed by means of the Wiener spectrum of its density fluctuations. 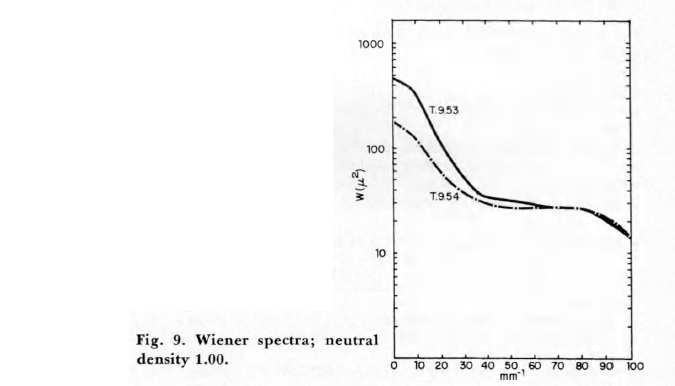 As shown in Fig. 11, the spectral density curves for the new film are slightly different from those of the T. 9.53, because of the new cyan color coupler, which was chosen for the excellent stability of the cyan dye. The peak absorbance for both dyes remains the same.

Compared with that of the T. 9.53, the contrast of T. 9.54 is increased for the higher portions of the sensitometric curves. The toe portions remain unaltered. 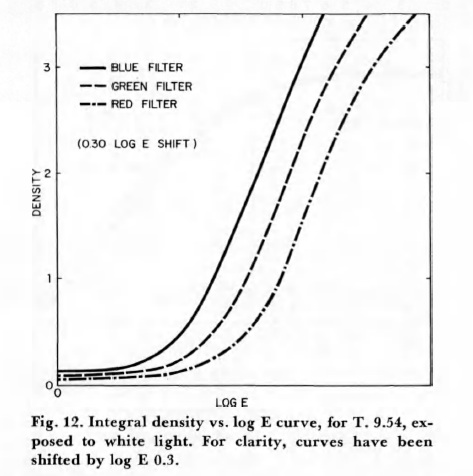 The speed has been slightly increased by 0.15 log exposure, while the speed balance is adjusted so as to give minimum correction with masked negatives.

The most suitable light source remains the sodium-vapor lamp. The peak output of this lamp corresponds to the minimum sensitivity between the green and red regions of the spectrum. The unwanted wavelengths of the sodium-vapor lamp are eliminated by the use of the Agfa-Gevaert 09 filter, formerly X 592.

For optimum reproduction, it is recommended that the soundtrack be confined to the top layers. This is achieved by any selective yellow filter, such as Agfa-Gevaert G 5. After bleaching, the rehalogenated silver of the top layers is redeveloped by selective application of a viscous soundtrack developer bath, GP 82.

The same solutions are used for processing both Type 9.53 and Type 9.54. Table I shows the processing sequence, together with the suggested temperatures and times of treatments. The processing formulas are given in the Appendix, where the numbers 1, 3, 4, etc., correspond to the step numbers in Table I. Compared with the formulas by Mr. Meeussen published in the Journal, January 1964, only the color developer has been slightly modified, as follows: 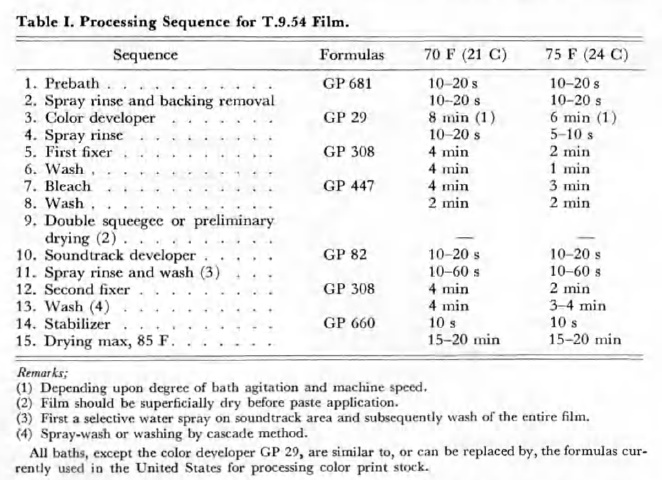 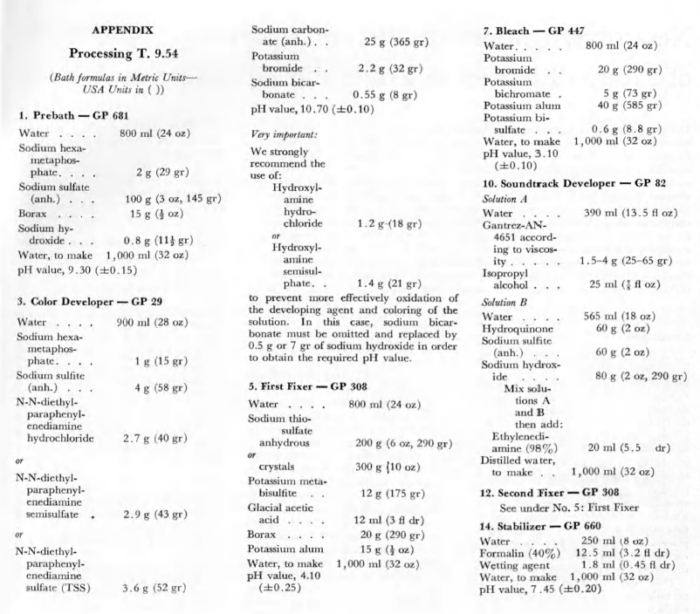