“Cinecolor Process. (Dufay-Chromex Ltd., London.)
This process should not be confused with the American Cinecolor process.

British two-colour additive system based upon the patents of D. Daponte, S. J. Cox, and certain patents of Adam Hilger Ltd. and J. H. Dowell. Later the patents were acquired by Dufay-Chromex Ltd.

Beam-splitter of the type in which a prism divider is placed in front of two objectives. In the earlier Cinecolour cameras the images were turned sideways with respect to the film, a pair filling one normal frame. In more recent cameras the pair of images is central to the frame and normal way up (as in Raycol and other systems), each picture being approximately 8 x 12 mm. in size. The prism has been very carefully corrected for refraction errors due to unequal path length of the long and short wavelengths, and there is complete freedom from parallax (Fig. 145). 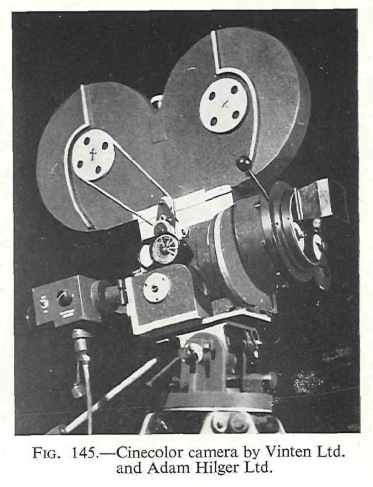 An ingenious prism erecting device was formerly used for prints made from the negative on which the images were turned sideways. Later, a pair of projection lenses was used in association with a prism system in which one element was movable, enabling one beam to be moved with respect to the other in order to obtain accurate superposition of the two images upon the screen. The colour projection optical unit is so constructed that by a single movement of an arm the change can be made immediately from normal black-and-white projection to colour. The colour filters in the projection system are made of glass, and not of gelatine, presumably to withstand the high temperatures to which a filter is subjected in an additive system of this type (Fig. 146). 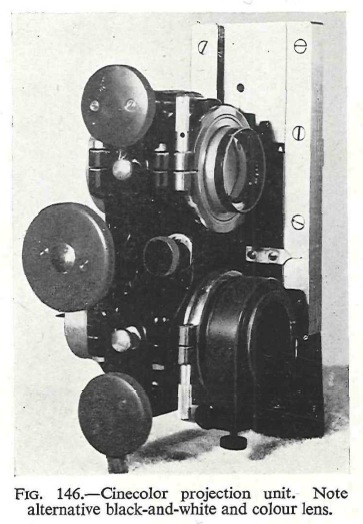 Films which have been exhibited in England and elsewhere have demonstrated that the optical system is of a high order of precision, no parallax occurring. Accurate superposition is obtained on the screen during synthesis – always a difficult achievement in additive projection, the smallest error resulting in extremely unpleasant effects of fringing and loss of general definition. The quality of the projected image leaves little to be desired, which is somewhat remarkable when the size of the original image is recalled.

The colour range of Cinecolor is the maximum possible with two primaries, the colour having that indefinable delicacy and charm of additive admixture. The only criticism which can be made is that from a commercial standpoint this process must face certain disadvantages inherent in any additive projection process, namely, the necessity of equipping theatres with a special projection device which must be universally adopted in order to make the world-wide exhibition of a picture practicable, and that it is doubtful whether the definition of details can compare with that obtainable in any process having normal picture size. After all, it cannot be denied that these processes which rely upon two or more superposed images of sub-standard dimensions are open to all the criticisms which might be levelled against the adoption of a miniature positive image for black-and-white. In the case of an image of 8 x 12 mm. the magnification for a large screen is so enormous that it is beyond the powers of the emulsion grain to record the fine detail.

On the other hand, it must be admitted that from the point of view of production finance there is much to be said in favour of a process which uses the normal length of negative for recording the picture; no further costs being incurred for processing of negative or positive than would have been the case for black-and-white.

“A two-color additive system developed in England. According to Klein, “nearly £200,000 was spent”1 on the early development of the process. Cinecolor Limited was a descendent of Bennett’s Cinechrome Ltd. and exhibitions of the process were given in England. Each frame carried a pair of images exposed through a single lens, and the color range possible with the process was reportedly quite good. The magnification of the miniature images required for commercial projection, however, exceeded the capability of the emulsion to record fine detail, and the process never advanced beyond the experimental stage. (This process should not be confused with the American Cinecolor system – a subtractive color process based on patent rights originally awarded to William V. D. Kelley.)

“We have had the opportunity during the past week to examine the apparatus for, and films produced by this two-colour additive system. Considering the drawbacks of any two-colour process, the results are extremely pleasing, and the simplicity of the gear required is a point worthy of consideration.

The basis of the process is a beam-splitting device, whereby twin images are recorded through complementary filters in the camera, within the limits of the normal 35-mm. “frame.” By removing the beam-splitter, and replacing the standard camera lens, black-and-white pictures may be taken on the same camera. The splitter unit itself is not large, and should be capable of easy fitting to all standard cameras. The two complementary pictures are recorded on normal panchromatic stock, so that the production cost of a colour film is not appreciably greater than that of black-and-white. The two pictures are the normal shape, and are thus rather smaller than those taken through an ordinary lens. While we have only seen the results on a small screen, we understand that definition on the standard large screen is satisfactory. In view of the fact that a “short,” taken with this process, by a cameraman who had no experience of colour work, ran for three weeks at a large cinema in Paris, this point would appear to be confirmed.

A normal projector is used, and a special projection lens (which is interchangeable with the normal lens used) placed in front of the film. Fringing, even on rapidly moving objects, is entirely absent, and the simple removal of the two filters from the projection lens produces a black-and-white picture. Since the two images axe superimposed, normal arc intensity may be used perfectly satisfactorily. Registration of the two images appears exact, and focussing is arranged in the normal way.

The films shown to us were very pleasantly coloured, and had an absence of that hard colour which is at times so annoying in colour-films. The blacks and whites, in particular, are well rendered, and though no colour process can ever reproduce a colour that is purer than the primaries used, a reasonably accurate rendering has been made possible.

Much research work has been necessitated on account of dispersion in the beam-splitter, and the present arrangement has been granted a master patent, which applies equally to other additive processes as well as the Cinecolor.

From the point of view of cost, the present process is almost the same as that for black-and-white results, and only a little extra illumination should be required in the studio. Processing is identical with that for black-and-white negatives and prints, so that no special plant is required. Sound may also be recorded on the film and printed on to the positive without any more trouble than that involved in the monochrome process.”

“Cinechrome Ltd was formed in 1914 by Colin Bennett and for seven years he worked on various methods of obtaining two colour records on one film, using lens and prism devices. In the early 1920s Cinechrome used an extra wide film with two rows of normal sized frames; representing red and green exposures, side by side. The film, which was perforated down the centre as well as at the edges, was produced by Kodak Ltd. A Cinechrome film of the visit to India by the Prince of Wales was made by S. J. Cox in 1921. It was presented at the Royal Society of Arts in 1922 and later at the Stoll Theatre. After 1925 the process, renamed Cinecolor, reverted to the use of a normal film with two half-size pictures within the normal frame area, taken with a beam-splitting lens and prism device, but little commercial use was made of it.”

“In 1929 Cox and Daponte renamed the [Cinechrome] company, and the process, Cinecolor Ltd and the process was adapted again, dispensing with the two sideways images in favour of two images registered the right way up in a single frame and a projection system which used an adjustable prism to enable the two images to be registered precisely – a system ironically not far removed from that originally proposed by Bennett in 1911. Commercial success, however, remained elusive. In 1937 the Cinecolor patents were acquired by a holding company, Chromex Ltd, and passed to Dufay-Chromex, which was at that time exploiting the additive Dufaycolor process but looking for ideas to develop a subtractive process.