Anscochrome movie film has an A.S.A. exposure index of 32 (more than three times as fast as previous cine color films). It is supplied in 50 foot magazines and 100-foot rolls.

Availability of this excellent fast new reversal color material will mean a minor revolution in 16mm cine circles, since it will open new, undreamed of, opportunities for movie making of a quality not attainable with the slower motion picture color films.

Anscochrome film, because of its high speed, allows for better pictures in dimmer light, while at the same time permitting use of smaller lens openings for greater depth of field. This will be appreciated particularly in closeups (such as flower studies), or when using long focus lenses.

The new film’s high speed also allows a wider variety of subjects and action to be shot in slow motion at high frame speeds.

Anscochrome, already well established in the still films field, has a wide exposure latitude, unusually high color fidelity through the complete tonal range from brilliant highlights to deepest shadow areas. The pictures get uniformly darker as exposure is decreased; uniformly lighter as exposure is increased; there is no shift in the color balance. This phenomenon is called “color curve conformity”.

Thanks to manufacturing innovations, new high speed Anscochrome renders red tones in their true-to-life shades, brilliantly saturated and perfectly recorded. Reds have always been a difficult color to reproduce accurately. The new Anscochrome records reds with high fidelity to the original.

With all its brilliance, new Anscochrome film still has a soft scale of gradation, with delicate rendition of flesh and sky tones. Anscochrome gives natural, true color screen images with detail in shadow areas and extended range into brilliant highlight colors.

The speed and general characteristics of 16mm reversible camera films remained relatively static for a number of years until 1954 when Anscochrome first made its appearance on the photographic market. With an exposure index of 32, it was more than twice as fast as other color films available at the time of its introduction. This faster color film was found useful by commercial producers and amateurs for “hard to get shots” where light was a problem.

It was soon discovered that another stop or two in speed could be squeezed out of the product by process manipulation. The general interest in forced processing prompted the study described in a paper which points out that, while it is possible to secure a speed increase by forced processing, certain disadvantages are associated with this technique, such as steepening of gradation and increased granularity.1

In 1957 Super Anscochrome 16mm film was introduced. This new film has the increased speed built in with no sacrifice in quality caused by forced processing. The film is made in two types, one balanced for daylight and the other balanced for tungsten illumination. The exposure index of each type is 100 when processed by the normal recommended processing procedure (Tables I and II). This is believed to be the fastest reversal color film available anywhere today and exceeds the speed of many black-and-white films. This speed is secured without the usual disadvantages associated with speed increase in photographic emulsions. The granularity has not been increased perceptibly, and there is no sacrifice in curve conformity. The film carries the usual one-year dating without requiring refrigerated storage. It is interesting to note that Super Anscochrome, a color film, is more than twice as fast as a black-and-white professional 35mm motion picture film which Ansco introduced in 1937 which, at that time, was acclaimed as the fastest black-and-white camera negative film.2 The film was awarded an “Oscar” by the Academy of Motion Picture Arts and Sciences for its speed achievement. 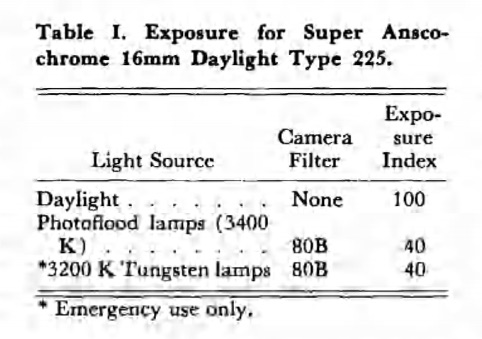 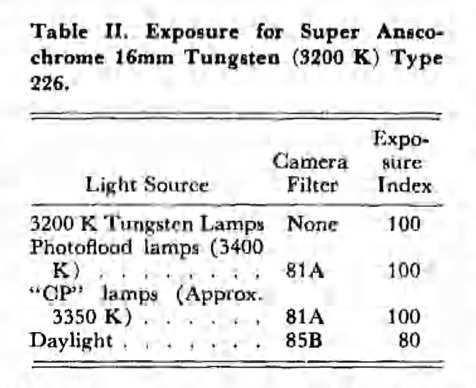 Super Anscochrome, with its exposure index of 100, is faster than most black-and-white films on the market today, and equal in speed to all but the fastest. This extreme speed makes it possible to make pictures in full color where previously only black-and-white pictures could be made. It reduces the amount of light necessary to expose a scene and in many cases it makes supplementary lighting unnecessary. Usually, the normal lighting used for television, sporting events, entertainment shows, etc., is adequate to give full exposure. In motion-picture work, with light levels as low as 2 candle-power/sq ft and with the usual lens equipment provided on motion-picture cameras, satisfactory exposure can be obtained. Large areas, such as the interior of factories and plants, which were once difficult if not impossible to photograph, can now be recorded on color film under the normal factory lighting. Newsreel coverage, which heretofore was confined to black-and-white film because of light restrictions, can now be made in full color. This makes color TV newsreels entirely practical.

Super Anscochrome 16mm Tungsten and Daylight motion-picture films are similar in characteristics except for their color balance. One is balanced for daylight and the other for tungsten (specifically 3200K) illumination to give correctly balanced colors under studio lighting (Fig. 1). It is recognized that the daylight type film is much too fast to be used with certain camera equipment. For instance, a normal outdoor scene illuminated by sunlight would require a lens stop in the order of f/32, which is several stops below the smallest diaphragm opening found on the average lens. In such a case, a neutral density filter will be useful. 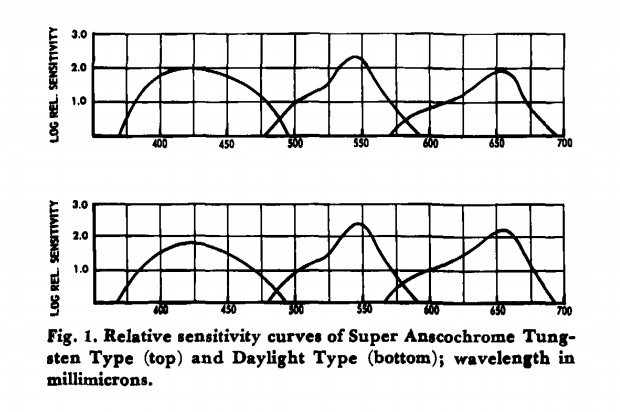 For the advanced amateur or professional using a camera with a variable shutter, the high-speed film has many advantages, such as making possible exposure with better motion stopping and sharper, clearer, pictures. The tungsten-type film is preferable for many purposes in indoor photography where insufficient lighting is a problem.

Except for the higher speed, the general characteristics of Super Anscochrome are similar to Anscochrome. Characteristic curves of the film are shown in Fig. 2. Processing is in accordance with the procedure published earlier.1 It will be noted that the film has a rather long, straight, line characteristic; nevertheless, it is recommended that the exposure be kept within ± ½-stop of normal. This is particularly important if prints or duplicates are to be made from the original. It is also advisable to keep the brightness range between a 1:2 and 1:3 highlight-to-shadow ratio. Where scenes are to be photographed without supplemental lighting, there is little control of the light-to-shadow ratio, but with modern indoor lighting technique, it is surprising how few scenes exceed the range which can be covered by the film. This is most evident where fluorescent lighting is used. 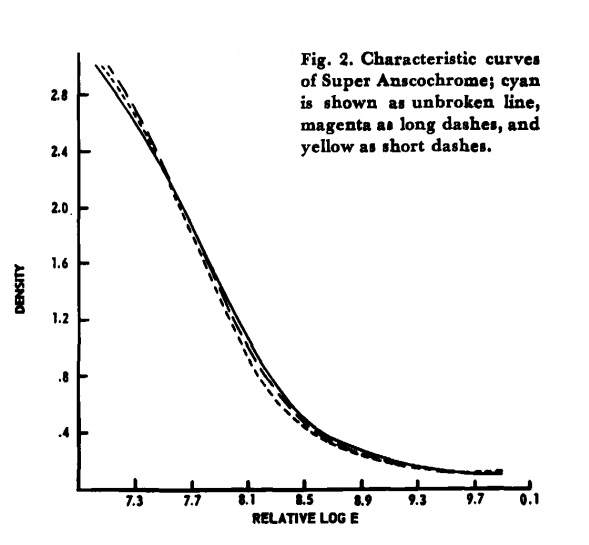 For areas illuminated by “Daylight Type” fluorescent tubes, Daylight Type Super Anscochrome will give the best result, although all daylight fluorescents will produce pictures somewhat on the cold side. Such fluorescent illumination is “cool,” and to reproduce it otherwise would be incorrect.

White fluorescent illumination falls between daylight and tungsten in color temperature, with a somewhat different spectral distribution than either of these sources. The film choice, however, would be Daylight Type with a filter CC-10B likely to give the best color balance with no change of exposure. There is no completely satisfactory correction filter for fluorescent illumination, because of the nature of the source.

Super Anscochrome film has little reciprocity law failure,3 particularly in the short exposure range, which makes it unnecessary to use compensating filters, even for high-speed photography (Fig. 3).

The dyes (Fig. 4) produced by dye-coupling development are similar in all Anscochrome type films. They have been purposely made this way so that they can be interspliced and printed on the same type duplicating stock. The duplicating stock is Ansco Color Type 238, and the sensitivity peaks of this stock are matched to the transmission of the Anscochrome dyes (Fig. 5), which facilitates subtractive printing when prints or duplicates are desired.

The general color characteristics of the two films are such that they lend themselves to intersplicing in printing without noticeable color shift in the final print. When intersplicing is contemplated, it is important that the perforation types match. Super Anscochrome is made in both standard and so-called short pitch perforation. Anscochrome Professional Film is available only with short pitch, since it is primarily a professional camera stock intended for use where prints or duplicates are required.

(At the Convention a demonstration reel was projected to show the variety of subjects which have been photographed without supplemental lighting.)

Neil Kaplan (Ramo-Wooldridge Corp.): What results do you get with tungsten film under fluorescents?

Harold Jones (who read the paper): It depends somewhat on the type of fluorescent light. If the fluorescent bulbs are the daylight type, it is preferable to use Daylight Type Super Anscochrome film. When you get into fluorescent illumination of the type which is white or between daylight and tungsten in color balance, the film choice should also be daylight type, but here a CC-10B filter should be used. Generally speaking, for fluorescent lighting, the results obtained on the tungsten balanced film will probably not be as satisfactory as on daylight balanced Super Anscochrome film.

J. K. Lewis (Dept. of Defense, Fort Meade, Md.): Do I understand that your film is being released in 70mm in the near future?

Mr. Jones: That is correct.

Mr. Lewis: Are you planning also to release 16mm width perforated for splitting to 8mm?

Mr. Jones: It is not our intent to do that, except that the film will, of course, be available with the 8mm-type perforation for high-speed camera use.

David Williams announce that they are to market a new range of Anscochrome Films that are soon to become available.

For users of half frame, David Williams are now returning Anscochrome half frame transparencies complete with half frame mounts at no extra cost.”