Revolution in the cinema — screamed the Paris-Presse. Le Parisien Libéré went one better: Movies in black and white are dead.

The subject of such superheated bannerlines last week was a new colored movie process called Rouxcolor. Though hardly as colossal as the excitable French puffs made out, the first Rouxcolor films made movie men sit up and take notice. To many they seemed sharper and more nearly faithful to natural color values than Technicolor itself. Furthermore, Rouxcolor is an impressive cost-cutter: it can be made with an ordinary black-and-white camera equipped with a special lens — at about the same cost as black-and-white film.

Four in One. Two brothers, Armand and Lucien Roux, both opticians, have spent 17 years at the process, working in their fifth-floor laboratory in a drab building on the Left Bank. Fortnight ago they invited famed Writer-Producer Marcel Pagnol to see some test shots. Greatly excited by what he saw, Pagnol (The Baker’s Wife, The Welldigger’s Daughter) asked to take some color shots of his own. They turned out so well that he decided to shelve the black-and-white film on Franz Schubert (La Belle Meunière) which he had just finished, and shoot it over again in Rouxcolor. When he releases the color film next September, he expects to make “screen history.”

The secret of Rouxcolor is a lens which is divided into four parts, each with a filter for a different color (red, yellow, green, blue). The four-in-one lens “decomposes” light, making four different images on the film. (A gadget prevents distortion of the images in relation to each other.) When projected through a similar lens, the four-color images are “recomposed” into one color picture. The color of the projected image on the screen is given, not by the film as in other processes, but by the four-in-one lens through which the black-and-white film is projected.

No Sale. Rouxcolor, the inventors say, can be filmed simply by attaching their four-in-one photo lens (a matter of two minutes) to a black-and-white camera, and shooting with black-and-white film. Projection is just as easy. Laboratories can process the film as if it were black-and-white, thus bypass the costly printing of color film.

The Roux brothers do not plan to sell equipment. They expect to rent lenses to producers and moviehouses, hope to have all France supplied in two years. Except for a few first-run moviehouses in major cities, the U.S. will have to wait its turn.

To Hollywood, which has spent millions in its quest for a simple, inexpensive color process, the invention of the Roux brothers seemed too good to be true. Moviemakers had seen too many processes come and go to get excited. But research cameramen have long worked to perfect a process in which the lens and not the film would be the principal color agent. Up to now, experiments with such lenses have not worked out commercially. Hollywood wanted to hear more.”

Camera. — The optical arrangement is based upon a patent of L. H. Roux (B.P. 385,141, 1932). In the specification the inventor begins by pointing out that previous optical systems having several objectives behind a single primary object lens had certain defects. One system of this type was composed of a single primary object lens which gave a real image of the object, in the plane of which image was placed a converging lens which directed the rays coming from the primary object lens on to a second optical system formed of a group of identical secondary objective lenses all situated in one plane and whose number equalled that of the number of monochromatic records it was desired to obtain; thus the secondary images are all formed in one plane in which is placed a sensitized surface. Now in such a system the plane of the emulsion of the film is conjugate with a certain plane in the object field of the secondary objectives. The result is that sufficient sharpness will be given only by images from a volume or zone of the object field which is contained between two planes which are very close together, whose distance apart is at the most equal to double the focal length (distance from the focus within which each image of a point object does not exceed a given tolerance) of the secondary objectives (about 1/10 mm). For practical purposes this volume would be a plane which itself is conjugate with a certain volume in the object field of the anterior objective, which volume, when focusing to infinity, would he between infinity and the hyperfocal length. Thus there would be a sharp image only of the space enclosed between the hyperfocal length of the anterior secondary objective has first of all passed through a circular peripheral region in the anterior objective which is the image of this secondary objective given by the interposed optical system, and not through a common region which would be the centre of the anterior objective.

The inventor claims to overcome these defects in the following way. A lens is placed immediately in front of the secondary objective, and this lens projects to infinity the image formed by the primary objective. The focus of this lens is in the plane of the real image formed by the primary object lens. Fig. 1 in the illustration (see Fig. 147) to the specification represents a diagrammatic section of the optical system. Figs. 2, 3, and 4 represent various alternative arrangements of the secondary optical system. Figs. 5, 6, and 7 represent the corresponding arrangements of the images on motion picture film. Fig. 8 is the projection system. 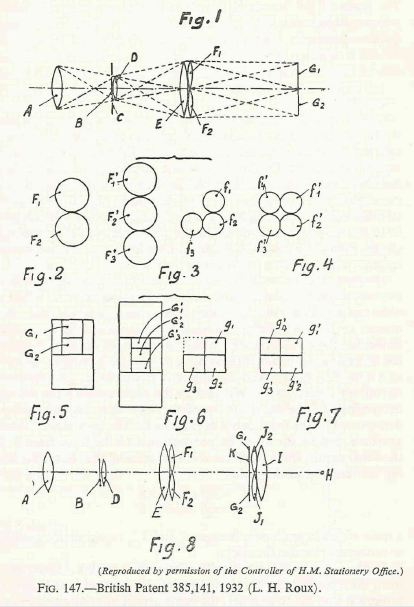 In Fig. 1, A is a suitable objective lens which produces a plane image B. In the plane B is placed a diaphragm so as to limit the field, and a field lens D so as to reduce the divergence of the light beam after formation of the image B; this lens is not absolutely necessary, however. Another lens E, the focus of which is situated in the plane B, is placed immediately in front of a group of secondary objective lenses F’ F” of suitable equal focal lengths. Each of these secondary lenses produces from B a new image G1 or G2 in the single plane of their foci, the said images being identical with B and with each other as a result of the focal lengths of lenses F’ and F” being equal.

a ratio which in practice is between 2 and 2.5, resulting in a considerable improvement in the focusing.

Further, the lens E practically eliminates parallax. Since the image from the objective A reprojected to infinity by said lens E has (the reprojected rays being parallel) the same aspect in relation to each of the secondary objectives, the latter give images without parallax defects.

It is claimed that the presence of the lens E in the projection system permits of working with the same spacing of the centres of the secondary objectives F as was employed in the camera lens and therefore obviates any necessity for adjusting said objectives. If the lens E were not provided, it would be necessary to make these objectives adjustable to enable the exact superposition of the images on the screen.

1. Apparatus for cinematograph or other colour photography of the kind in which a first objective gives a real image of which several secondary objectives then give their several images, which may be superimposed and are all situated in one plane, characterized by the fact that a lens, reprojecting to infinity the image formed by the principal objective, is placed in front of the secondary objectives and in close proximity to these objectives, the focus of this lens being in the plane of the real image given by the principal objective.2. Apparatus for cinematograph or other colour projection, comprising the elements of an optical system arranged as claimed in Claim 1, the direction of projection being the reverse of that defined in said claim for the purpose of photography.1

Projector. — Lens as described above for the camera. See Fig. 147 (Fig. 8 in specification).

Remarks. — The writer has not had an opportunity of seeing any pictures projected nor of ascertaining to what extent the claims of the patent are actually met in practice. Apparently four pictures were originally taken within the space of one frame.

Monsieur J. Vivié of Paris has reported to the writer that the brothers Roux have continued their researches in spite of the war, having further perfected the optical system of the camera, and claim to have eliminated fringing. Four separations are now being taken on each normal frame. As for projection, they had concentrated on the problem of luminous efficiency. It had been found that in order to equal normal screen average luminance (ten foot-lamberts) they were proposing to use a source of light at least six to eight times the normal intensity. It would seem that no such increase is in the least possible, unless it is proposed to reduce correspondingly the screen magnification.

1 Quotations from British Patent Specification by permission of the Controller of H.M. Stationery Office.” 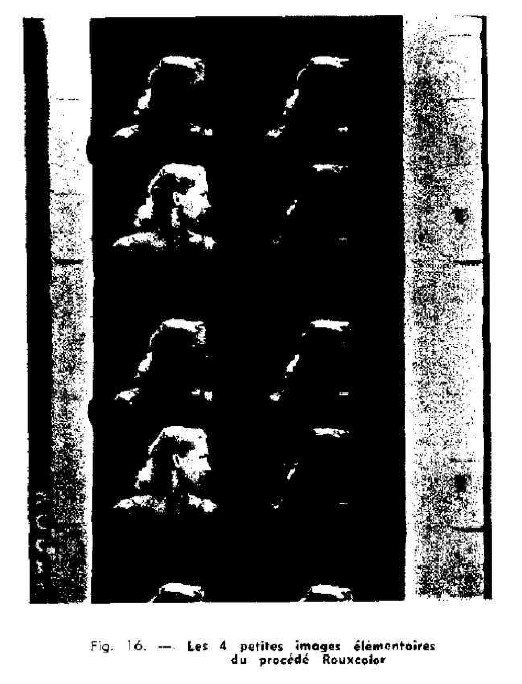