Kodachrome II was introduced in 1961. It was the first film stock since 1936 that was specifically meant for amateur use. Eastman Kodak presented the material as superior to the ‘regular Kodachrome’. It supposedly had a higher speed of 25 ASA for daylight and 40 ASA for photoflood illumination, was sharper and had an improved image quality.

The new amateur film stock was intensely discussed in the trade press. The American Cinematographer, for instance, published an article by Ernest Wildi, who elaborated extensively on Kodachrome II, comparing it to what had been on the market so far. He explained that certain events could now be filmed, which could not be captured with Kodachrome I, such as “… stage and ice shows, circuses, indoor sports events, night street scenes, fireworks displays, etc.” (Wildi 1961: 294).

Further, Wildi explained, Kodachrome II also permitted to film indoors, with only the light of a table lamp or an overhead lighting fixture and extra illumination. Wildi also stated that in Kodachrome II the colors were of better quality, especially bright and pastel colors (Wildi 1961: 294).

Kodak announced the new material to be “…sharper than regular Kodachrome. The emulsion is thinner and scatters the light less” (Wildi 1961: 295). In addition, he explained that the new Kodachrome was less contrasty. “You get softer gradation without sacrifice of color saturation. Shadow areas are softer and more ‘open,’ and dark areas don’t go dark so fast with underexposure” (Wildi 1961: 312).

With regard to this broader latitude of the new Kodachrome the following anecdote is quite interesting. In 1962 Mr. Holmes from Eastman Kodak wrote a letter to Mr. Evans from the Color Technology department at  Kodak Park, in which he explained that, despite an overall positive press on Kodachrome II, there had been some attacks from “salonists and other camera club detractors” saying that Kodachrome lacked the “Rembrandt blacks” of regular Kodachrome. “In other words,” Holmes wrote ,“Kodachrome II has been criticized for not having some of the glaring faults of Kodachrome Film” (Holmes, August 1962). Here we see a remarkable difference in opinion between a technological perspective and an art critical one. As studies have shown in some cases the flawed and the imperfect is given aesthetic value, whereas the technologically perfect is considered slick and uninteresting. The remarks on these so-called “Rembrandt blacks” fit that type of discourse. On the other hand, the complaints also confirm the increased latitude of the new material.

“While the new Kodachrome Type II film cannot be considered a truly high-speed color film, its extra sensitivity compared to standard Kodachrome offers film makers an important new medium for low-level-light photography. The new color reversal film, available in both 8mm and 16mm, is rated ASA 25 for daylight and ASA 40 for use with photoflood illumination. Being two and one-half times as fast as regular Kodachrome, it offers the film maker many advantages. Industrial and in-plant cinematographers especially will find it useful for some color film assignments.

The film’s increased speed makes it possible to reduce lens apertures by 1 1/2 stops, thereby increasing depth of field. On interiors, photofloods or other studio lamps can be placed farther back from subject and camera where light glare is a problem for subjects – especially small children.

For 8mm and 16mm amateur film makers, Type II Kodachrome now makes possible shooting under conditions which formerly were out of the question. Now these same camera owners can film stage and ice shows, circuses, indoor sports events, night street scenes, fireworks displays, etc. Heretofore, many amateurs and not a few 16mm professionals were unable to shoot such subject matter because of the limitations imposed by the speed of their lenses. Few 8mm cameras, for example, are equipped with lenses faster than f/2 or f/1.8. The sensitivity of the new Kodachrome Type II film is increased sufficiently to now permit shooting most all of the low-level-light subjects mentioned above.

Although a film rated ASA 40 (tungsten) generally is not considered “available light” emulsion, the new Kodachrome II is sensitive enough to permit shooting indoors with illumination provided by a table lamp or an overhead lighting fixture – and without augmenting this illumination with photo lamps of any kind. Of course, this is not possible with every camera. To make acceptable exposures in the illumination described above, a lens with a maximum aperture of f/0.9 would be required. Such lenses are available today for both 8mm and 16mm cameras. Two lenses that have found wide acceptance are the Switar 13mm f/0.9 for 8mm cameras and the Cinor 25mm f/0.95 for 16mm cameras. The mounts of both lenses are standard and therefore are adaptable to many 8mm and 16mm cameras.

It is difficult to design a lens which will produce sharp, contrasty pictures at these extreme apertures; thus, such lenses are not inexpensive. The advantages and wonderful pictorial possibilities they offer are, however, so exciting that they are a worth-while investment. When used with the faster Kodachrome II film, they make unnecessary the use of indoor lighting equipment except when shooting in extreme low light levels. The cost saved in not having to purchase such equipment helps to balance the cost of high speed (maximum aperture) lenses.

This fast-lens, fast-color-film combination offers other advantages, too. No longer is it necessary to string extension cords and set up light stands in a living room or hall to film, say, a wedding reception. Subjects are more at ease before your camera when glaring lights are not beating down upon them. And finally, shooting indoor scenes in available light, which the new Kodachrome II now makes so very easy, insures films with more professional polish.

The range is almost limitless: night scenes of people in an amusement park; at a county fair; groups under a lighted theatre marquee, in a used car lot, or anywhere that there is substantial illumination for available light photography.

For the professional 16mm cameraman, the use of an ultra-fast f/0.9 lens with Kodachrome II film can produce pictures having better definition than is usually obtained with color films having a higher ASA rating and used with slower lenses.

Eastman Kodak Company, in its initial public announcement on the new Kodachrome film in its Handbook News, stated: “Kodachrome II is sharper than regular Kodachrome. The emulsion is thinner and scatters the light less. It lets you project big, sharp images of excellent quality, even when viewed close to the screen. The improvement in sharpness is most evident in 8mm movies because of the tremendous magnification required for screen-size images. The sharpness of 16mm Kodachrome II is similarly improved, but this may not be as noticeable because the images are magnified less during projection. Obviously, the comparative sharpness will depend on the optics involved— the higher the resolution of both the camera lens and the projector lens, the more pronounced the visual improvement will be. But even inexpensive equipment will make better pictures because of these film improvements.”

The grain size of Kodachrome II, Eastman Kodak points out, is smaller than that of regular Kodachrome, and the grain pattern itself is less conspicuous. Also, Kodachrome II is
somewhat less contrasty than regular Kodachrome. You get softer gradation without sacrifice of color saturation. Shadow areas are softer and more “open,” and dark areas don’t go dark so fast with underexposure. Generally, bright colors are more saturated and pastel colors are greatly improved. Reds in particular are more brilliant. Greens are more saturated, and yellows appear less orange and more pleasing.

The accompanying chart shows recommended lens settings for a number of typical scenes or subjects under tungsten illumination. Those who own electric eye cameras will find the information of value to them also. Most of the cameras having built-in exposure meters will give quite satisfactory results under normal daylight conditions outdoors. But when the scene is predominantly low-level or consists of large light or dark areas, an exposure meter or an electric-eye camera will give a satisfactory exposure reading where a reading of the principal subject can be made close-up. In most cases this is impossible, especially when shooting an ice show, a stage performance, a colorful neon sign display, etc. The exposure data contained in the chart covers most of the subject material of this type which 8mm and 16mm camera owners may now shoot. 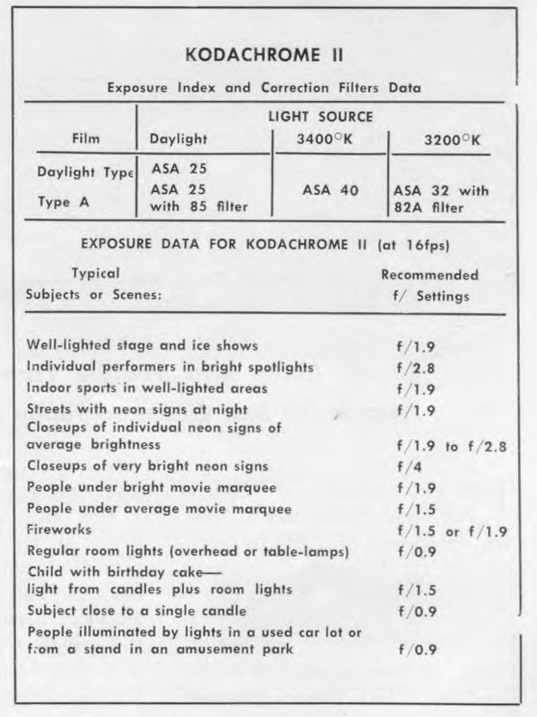 Calvin Productions, Inc., of Kansas City, Missouri, always among the first to explore new materials and techniques applicable to professional 16mm film production, have tested and evaluated Kodachrome II and rendered some opinions in the March issue of The Aperture, the company’s workshop publication for 16mm film producers.

“Comparing Kodachrome II with Outdoor or Type A Kodachrome is strictly a ‘no contest’ endeavor,” according to the Calvin report. “Kodachrome II is fantastically improved over the older Kodachrome films. The biggest improvement is in sharpness. There is also improvement in grain characteristics, color and latitude – especially in shadow definition.

“How does Kodachrome II compare with Ektachrome Commercial where prints are needed? Any improvement in 16mm sharpness is always interesting. The higher contrast of Kodachrome II, however, might be a disadvantage in prints. Frankly, our conclusions are based on preliminary tests only of a number of rolls. We would like to run a more sophisticated series of tests before going out on a limb with any blanket recommendations.

“We have noticed one disturbing item – at least it’s disturbing to film duplicating laboratories – and that is the new film duplicates under quite different printing filter conditions than ECO originals. This condition will require rather drastic scene-to-scene color correction where Kodachrome II and Ektachrome Commercial scenes are intercut. Because of this, we strongly recommend that Kodachrome II originals not be intermixed with other films stocks.

“For outdoor or nature photographers,” the Calvin report concludes, “this new film does look very promising right now. For average commercial work, we want to see more tests before we get too optimistic.”

The foregoing report by Calvin is extremely interesting, but it should be emphasized here that Kodachrome Type II color film was designed especially for the amateur movie maker and is considered by Eastman Kodak an amateur film, not intended for commercial use where duplicate prints are required. For general needs in the commercial field, Eastman Kodak points out, it supplies 16mm Kodachrome Commercial film which was designed especially for commercial film production.

In the meantime, others beside Calvin have explored the possibilities of Kodachrome II for commercial purposes and have come up with some interesting results. So interesting, in fact, that Kodak reportedly now is conducting new and broader laboratory tests on the duplicating qualities of the film.

It will be remembered that initially Kodachrome was introduced as strictly an amateur film. Then, as today, inquisitive minds experimented with the film and very soon it was being widely used for many commercial motion picture needs. This led Kodak to develop still newer and better 8mm and 16mm color films – of which Kodachrome Type II is the latest.”